Offering a jamboree of jam flavors 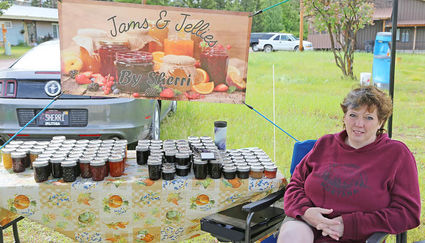 Potomac Jam Maker Sherri Housley offers Seeley Lake Market customers a plethora of jam and jelly flavors.  She makes them all herself. The market is open every Sunday from 10 a.m. to 2 p.m. through Labor Day.

SEELEY LAKE - Potomac resident Sherri Housley has been selling her collection of various jam and jelly flavors at Seeley Lake Market for around a decade.

She learned how to make jam at an early age when she would help her family pick strawberries and make jam out of it.

"That's how we ate, we were really poor," she said.

She finds the jam-making process "relaxing" and says that describing it is like describing art. She said while some may freeze the fruit in their jars, she prefers to leave them in a dry environment over the winter. She starts making the actual jam around March.

She currently has around 600 jars made with it taking about an hour to make six to nine jars.

She said her most popular flavors are raspberry, huckleberry, triple berry and blackberry. She has also begun offering sugar free and unsweetened versions at her patrons' request.

Housley is the general manager at Clearwater Stop N Go so she uses this time to also sit and chat with residents and visitors.

"[I look forward to] the people, especially the repeat people," she said. "It's my time to socialize because I work a [lot]."