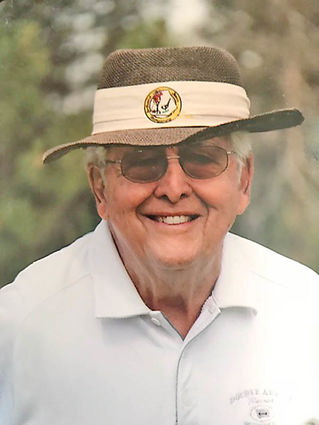 SEELEY LAKE - Al died peacefully at home of natural causes, surrounded by his family. He was born in Philadelphia, Pennsylvania to Kenneth W. Foucar and Dorothea Allen.

After serving in the Marine Corps, Al attended the University of Idaho, where he was a proud Kappa Sigma, earning a BS in Forestry. During these years he met and married the love of his life Barbara Rydell of Great Falls, who was studying nursing at Sacred Heart in Spokane. They spent 62 years as partners until her death in 2015.

Al worked with the Bureau of Land Management in Whitehall and Malta. He and Barbara moved to Missoula where Al completed a MA in Education from the University of Montana. He went on to earn his Ed.D. in Educational Leadership from Arizona State University. His education career began at Missoula County High School as a biology teacher in the brand-new building biology lab. His career continued with a move to Chandler AZ in 1957.

In 1962, the family, complete by then with the births of Diane (Malta), Suzanne (Missoula) and Donald (Mesa, Arizona), moved to Escondido, where they stayed. Al began his career in the Escondido Union High School District as Vice-Principal of Orange Glen High. He spent the best years (all three of us are Cougars) as Principal at Escondido High. He was Principal at San Pasqual High and concluded his career as Director of Personnel for EUHSD. He was passionate about public education and loved his students and staff.

After retirement, Barbara and Al spent summers in Seeley Lake. His new passion was golf. He and a group of like-minded golfers worked tirelessly to bring a golf course to Seeley Lake and that effort was rewarded with the opening of the Double Arrow Course in 1994. They also created a yearly family celebration, 4thgiving, where family and friends have now gathered annually for days-long fun and fellowship that includes beach day, Uncle Al's Golf Tournament, the Champions dinner and awards, the Seeley Lake Parade, duck races; all concluding with a turkey dinner and fireworks.

Al loved deeply and was deeply loved by his family and friends. He is survived by his children Diane (Reg), Suzanne and Donald; grandchildren Jonathan (Lindsey), Katy, Amanda, Alex, Natalie and Camille; great grandchildren Harper Grace, Cameron, Mason and Sloane; and by all those who loved him as Uncle Al.

To honor him support your local public schools, the Seeley Lake Community Foundation or Rotary Foundation.

A Celebration of his Life will be held Saturday, July 3, 2021 at 10 a.m. at the Seeley Lake Community Hall.

Keep Up The Good Work. Full obituary at alhiser-comer.com