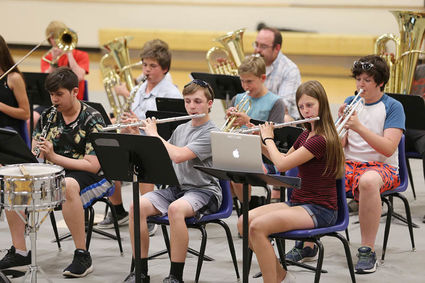 The Seeley Lake Elementary School junior high band plays a mixture of concert and pep band songs for their concert Tuesday, June 1. Front left to right: Kaden Contreras, Aiden Posthumus and Bailey Bartlett. Middle: Kolten Zurmuehlen, Noah Stone, Wesley Stevenson. In the back is Aaron Morgenstern who volunteered to play with the students.

SEELEY LAKE - The Seeley Lake Elementary junior high band showed what their music program is capable of at their year-end concert Tuesday, June 1. The show featured a mixture of both concert and pep band songs.

Music teacher Janet Morgenstern said many of the performers were playing at a fifth grade level when they began practicing this January. However, over time they have been able to catch up to their respective grade levels.

"They did really, really well tonight," she said. "We knew we would be missing a couple of kids, [but] today they held true. The kids are awesome."