Preserving the legacies of those who served 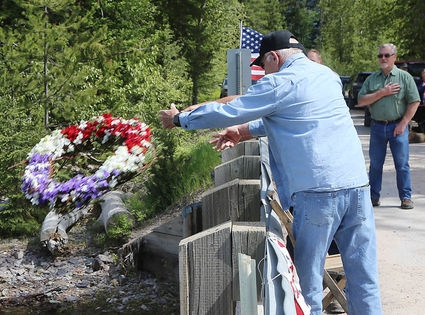 Swan Valley Veterans Richard Wiseman and Ray Haera drop the ceremonial wreath into the Swan River as "Taps" play in the background.

SWAN VALLEY - Veterans and residents gathered together on the Cold Creek Bridge in Condon to honor fallen military members at their Memorial Day ceremony Monday, May 31. During the ceremony, Edward Klassen, Swan Valley American Legion Post 63 commander, spoke about the history of Memorial Day and its incarnations across the U.S. before it became a national holiday in 1971.

"These American veterans of all American conflicts are at rest now," he said. "We must bear the burden of carrying this fight for freedom for all those who sacrificed. Although the politics of the day may find the love of...