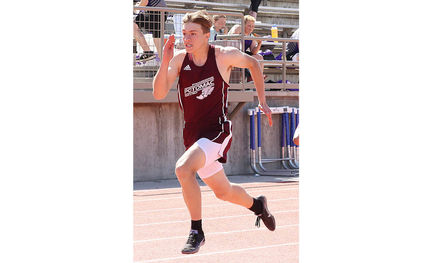 Corbin Welzien smoked the competition in the 100-meter at the Zelda Haines Invitational May 11 finishing nearly a second ahead of the nearest competitor in 12.29. Welzien broke six eighth grade records at Potomac School this year.

POTOMAC – The Potomac School track and field team wrapped up their less than six week season May 20 with six track meets and 15 new school records. With two-thirds of the 18-member team never having tried track before, Coach Beth Copenhaver said it was a great season with "a good set of kids. The kids showed up, they worked hard and you can always tell those kids that wanted to push themselves harder and go out and break some records."

Potomac's season started mid-April. There were more junior high students that came out this year than in years past.

"It was trying something new since the...