Norm Baier has raised a few eyebrows recently because of the clearing of his land next to the Valley Bank.

"People are starting to get curious, I guess," he said Saturday in a brief conversation.

Baier is building a new convenience store; complete with gas, diesel, and propane. He plans to offer an assortment of takeout foods such as hot dogs and maybe chicken.

"We want to catch those guys," he said, nodding toward the endless stream of RV's and campers traveling highway 83, "before they turn and go around the lake."

His new business is called the Seeley Lake Convenience Store and will have one very outstanding structural feature: the main gas and diesel storage tanks will be enclosed in a cement "basement."

The white-haired lady with the smiling face who greets you at the Elkhorn Café & Motel is Norma James. She and her husband Bud have operated the Elkhorn since 1979. Norma & Bud moved here from Toledo, Ohio.

"Bud wanted to move west to the mountains, so we did," she said.

Norma had some business experience, but she had never managed a café before. "Maude Ruppert was a big help in getting us started." Since then, Norma's cheerful outlook has seen her through long, slow winters and fast-moving summers in Seeley Lake. "I'm surprised myself. I didn't think we'd last six months. Now we've been here six years," she laughed.

The Elkhorn is popular for homemade pastries, pies and cinnamon rolls.

Fish management is getting pretty complex these days, according to Don Peters, Fisheries Biologist with the Montana Department of Fish, Wildlife and Parks in Missoula.

"It's going to become a more and more valuable tool," Peters said in a telephone interview earlier this month.

The MDFWP is planting a variety of fish in various lakes of the Clearwater drainage this year.

Brown's Lake reportedly froze out during the winter of 1984-85. It was planted with Eagle Lake and Arlee "triploids" or rainbow trout. The triploids are sterile and are planted experimentally to see if they will grow faster because they put less energy into reproducing and more into growing.

Brown's Lake has a tremendous sucker population and biologists hope that the Eagle Lake trout will feed on suckers.

Salmon Lake is not planted because it has a naturally reproducing population of brown trout and kokanee salmon.

Placid Lake is planted with a strain of rainbow that will feed on perch populations.

Seeley Lake has had problems in the past with rainbow trout that "won' stick around" and go downstream to the Blackfoot after being planted, according to Peters.

The MDFWP is now planting Seeley Lake with McBride, or Yellowstone cutthroat. "These guys are sticking around," Peters said.

The McBride cutthroat are planted in the summer and average about three inches long. 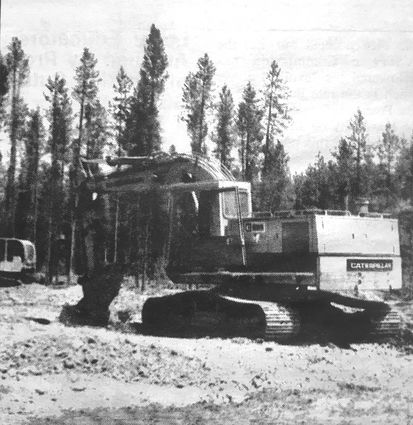 Construction is underway for a new convenience store in Seeley Lake.

Yellowstone perch are a problem with all the Clearwater lakes. They are stripping the food supply so that the trout "just don't have enough to eat," Peters explained. The McBride, or Yellowstone cutthroat, feed on yellow perch.

im Haines, retiring after 37 years at SSHS, was given a party by students and staff last Wednesday following the awards assembly. To read the full issue visit https://www.seeleylake.com/home/customer_files/article_documents/2001-05-31.pdf