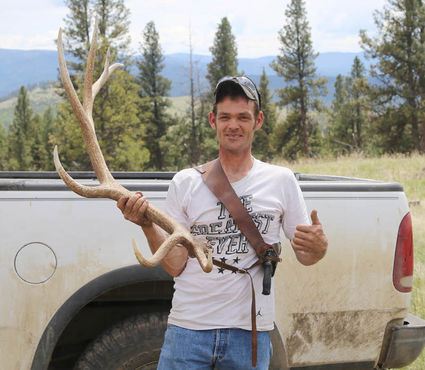 Chad Wenz of Deer Lodge shows off an antler he discovered while antler hunting in the Blackfoot Clearwater Game Range. This is his third year he has participated in the hunt which kicked off this year Saturday, May 15.

GREENOUGH - Wildlife enthusiasts scoured the Blackfoot Clearwater Wildlife Management Area, also known as "the Game Range," for antlers as the area opened to the public Saturday, May 15.

Montana Fish, Wildlife and Parks Sergeant Dan Curtin said that from his perspective this year's turnout was about the same as previous years and may have actually been slightly less than in the past. He estimates that there were close to 1,000 people on the Range.

"Everything went really smoothly," he said. "[Visitors] were spread out more than usual which was good to see. ... We didn't see any traffic issu...