Looking back over the past 35 years of Pathfinders 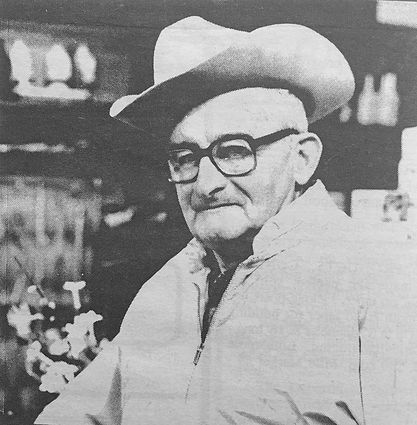 Dan Cainan was named Citizen of the Year in 1986.

The May 20, 2021 issue marks 35 years of publication for the Seeley Swan Pathfinder. Started by Swan Valley residents Suzanne and Sheldon Vernon and Seeley Lake residents Dick and Michele Potter, the Pathfinder was envisioned to focus on community issues and provide a forum for discussion.

In the inaugural issue May 22, 1986, Potter explained the new enterprise and the reason for its existence, "We believe that this newspaper is making its first appearance at a time when the community has arrived at an important crossroads.... Many complex issues lurk within the dynamics of our community's growth....If we are at a crossroads, then the question arises as to how to find the best path to travel. We at the Pathfinder do not presume that our name alone bestows some special ability to navigate through this thicket of issues and problems. Only the community as a whole can chart its proper path through the democratic processes of communication, debate and, ultimately, consensus."

While some would argue the path has become less well defined and consensus is harder to find among the myriad of issues, we feel the successes, achievements and people that brought us to this point are worth remembering.

We hope you will enjoy the journey with us through the past 35 years as documented by the Pathfinder.

Each week we will run parts of articles that appeared in the issue 35 years ago and 20 years ago. The entire issue will be uploaded to our website seeleylake.com for you to enjoy!

The survey committee met May 20 to begin selection of a consultant for the upcoming Attitude Survey for the communities of Sunset Hills, Seeley Lake, Swan Valley and Condon. The field was narrowed to two finalists and the final choice is expected to be made within a few days.

The survey committee was organized in January by members of the Swan Valley and Seeley Lake communities. Impetus for the survey committee began several years ago when the county commissioners were drawing up a Comprehensive Development Plan for Missoula County.

Pat Harbin, Condon, attended several of the meetings. "We finally just got mad one night and walked out (of the county commissioner's meeting)," he said. "We told them we were going home to write our own plan."

Community members Pat Harbin, Jeff Macon, Dan Mizner, Roger Johnson and others were involved in the Comprehensive Plan and initiated the formation of the Survey Committee. They realized that they needed opinions from all residents of Swan Valley and Seeley Lake to identify the highest priority needs in the communities, and to look at options to address those needs...

Citizen of the Year Dan Cainan

The first annual Citizen of the Year Award was presented to Dan Cainan at the Seeley-Condon Chamber of Commerce Banquet last month. Though sponsored by the Chamber, the nomination and selection of the recipient is made by a cross-section of Valley residents. The Citizen of the Year Award recognizes individuals who have made significant contributions to the general quality of life in the Seeley Swan Valley.

Dan Cainan's love affair with the area sprang up during his days of "settin' chokers" for Anaconda at Camp #7 on Big Sky Lake (then called Fish Lake). After service during World War II, Dan owned and operated Dan's Food Market in Missoula for eleven years. Still finding himself drawn to the beautiful Seeley Swan area, Dan sold his store in Missoula and bought the Freshour store (now the J&L) and moved to Seeley Lake.

"Oh, they all thought I was goin' crazy then. You see, I bought Freshour's after the season was over - in September. I was facing the dead of winter and they all knew I was gonna go broke. That was back in 1961..."

Pyramid back on course after six months

Last November it appeared there would never be any more ads like the one above which has run in the last two issues of the Pathfinder.

The ad is reassuring to Seeley Lake businesses, school officials and just about everyone else in this small, mountain community which last November faced the prospect of losing its main employer when the saw mill fell on rough times 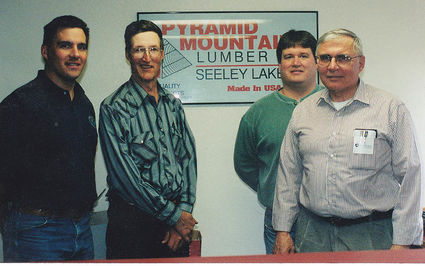 Looking Forward! With months of tedious negotiations behind them, Pyramid owners are looking to the future after concluding a financial and ownership reorganization in the last two weeks. Joining the Johnson families in Pyramid ownership is Charlee Parke (center left) who purchased the stock of the Alfred and Doug Mood families. At right is Roger Johnson, Pyramid president, and his sons, Todd (far left) and Steve (center right) who retain Pyramid stock.

But instead of an auction- planned by the mill owners when they announced a permanent shut-down last November- we now have help wanted ads, equipment on order, a new major stockholder, and a relieved community which had earlier contemplated the loss of over 100 jobs and an exodus of families and school-age children.

Saving Pyramid became the focus of efforts by Missoula County Commissioners who enlisted the support of the Missoula Area Economic Development Corporation and its executive director Dick King.

All these pieces had to fall together in time for Pyramid to make a decision whether to continue operations or hold an auction as planned earlier for this spring. The process prevailed over almost six months, reaching a final, positive conclusion just under two weeks ago when a stock sale was finalized.

Doug Mood, whose father co-founded Pyramid just over 50 years ago, announced in early March that he and his brother Alfred, both active in mill management for many years, had agreed to sell their stock in Pyramid to Charlie Parke of Parke Logging in Drummond...