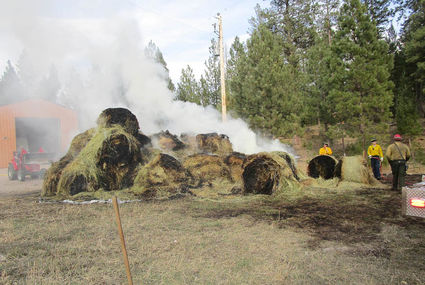 Provided by the Olson family

The stack of 40 bales of hay, which caught fire on April 7, had to be knocked down and pulled apart. While the haystack was located near a power pole and line, there was only minimal damage to the pole.

POTOMAC – Just after 5:30 p.m., April 7, 10 fire engines responded to a hay fire in the lower Blackfoot Valley north of Highway 200. No structures were lost and no one was injured, however, the homeowner lost 40, 800 pound round bales of hay. This was the fourth human-caused wildland fire Greenough/Potomac Volunteer Fire Department has responded to since April 3.

Greenough/Potomac Fire Chief Ryan Hall said they were dispatched a minute after the call came in at 5:36 p.m. on Wednesday for a haystack on fire. A person living at the house was burning grass near the haystack. The upslope, aft...