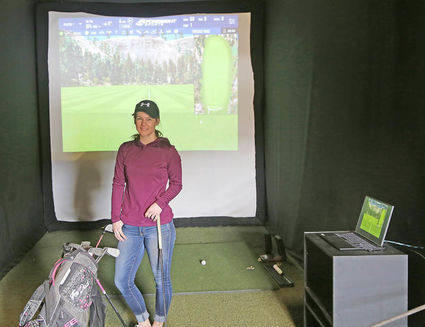 Owner of Big Dog Dad's Golf Indoor Golf Simulator Chelsea Cahoon. Cahoon opened the facility in January with the intention of honoring her late father, Wayne. She hopes to provide an opportunity to golfers of all experience levels with this new venture.

SEELEY LAKE - Chelsea Cahoon is hoping to offer Seeley Lake residents and visitors a unique recreational service with her new business venture - Big Dog Dad's Indoor Golf Simulator. Along with offering leagues in the fall and spring, golfers of any level can keep their skills polished during the offseason.

Cahoon officially opened the virtual experience Jan. 28. Her father Wayne purchased the simulator last year. Wayne was the head coach of the Seeley-Swan High School golf team who allowed team members to use the simulator as a way to practice outside of the short golf season. He considered turning it into a fully functional business but it never went outside of the golf team up to his death in September, 2020 following a plane accident.

Cahoon, with the help of loved ones, got the ball rolling and developed a fully functional simulator. It is currently located where Montana Log Home Supply used to be, on the east side of Highway 83 just south of the Seeley Lake Historical Museum and Visitor's Center. The business' name "Big Dog Dad" came from a nickname Wayne gave himself.

Cahoon said her passion for golf originally came from her father. She continued participating in it because she enjoyed the sport's laidback energy.

"It's just a fun, relaxing thing to go out and do at the end of the day, get a little exercise and hang out with people," she said.

This is Cahoon's first time running a business. She said she had a lot of volunteers assist with the manual labor of setting up the equipment and furniture which mostly took place in December.

"It's been really fast and really smooth," she said. "Dad had already prepped a lot of it, so it was pretty easy just to move it around into place to get it going."

While Cahoon is the main owner she has run many of the ideas by her younger brother Christian. She wants the business to serve multiple purposes.

"I really just wanted to do it to honor my dad in the first place and so anything else is kind of a bonus," she said. "I thought it would kick off and be a fun, cool thing for tourists and locals."

She currently has seven teams participating in a league at the simulator. She intends to have two every year, one in late fall and one in late winter, early spring. These will last between six and eight weeks. She intentionally scheduled these so she wouldn't "step on any toes" with Double Arrow Golf Course who runs their league in the summer.

At first she was not sure about keeping the simulator open over the summer but after further consideration she decided that she would, to accommodate people who are not regular golfers and do not want to make such a large investment towards playing on an actual course. This simulator also allows regular golfers to continue practicing outside of the regular season. 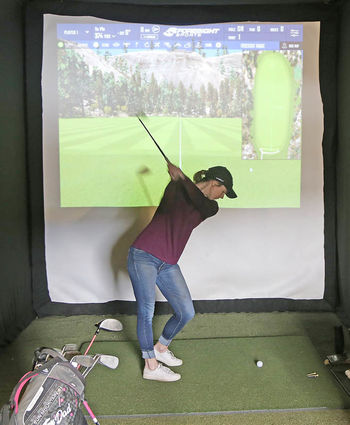 "We have a super short golf season in Montana, especially Seeley Lake," she said. "[Our area] is one of the last to thaw in the spring and so it opens up the door for people to be out swinging clubs and practicing during the winter in the offseason."

It costs $15 to play nine holes and $25 for 18. All equipment is provided but participants have the option of bringing their own clubs.

Cahoon said bookings have filled up slower than she was expecting after she saw immediate community interest following the initial announcement. However, she believes business will pick up after word continues to spread.

She expects it to be a bit of a challenge to organize multiple appointments within a small physical location but she is trying to keep her hours flexible. Currently Big Dog Dad's Golf is open seven days a week from 10 a.m. until the last tee time at 7 p.m. Bookings must be made in advance.