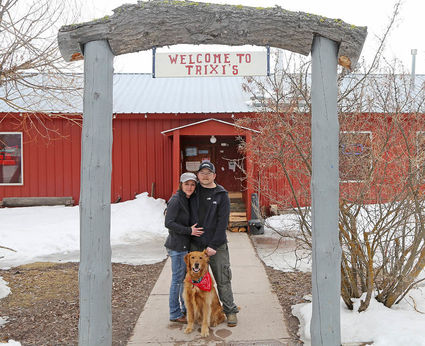 Tiffanie and Ryan Zavarelli stand outside the front entrance of Trixi's Antler Saloon with their dog Zeus after Ryan's parents, Ray and Cindy Francis had recently transferred the bar and restaurant to the couple. They are looking forward to integrating themselves into the community and maintaining the building's history.

OVANDO - Ryan and Tiffanie Zavarelli are ecstatic to be entering into a new phase of their lives as they take ownership of Trixi's Antler Saloon from Ryan's parents Cindy and Ray Francis beginning April 1.

Tiffanie said come April the couple will be jumping right into their new positions with no transitional break in between. The couple recently moved back to Ovando in preparation of the change. They will be taking this on as an opportunity to "step out of city life" and be closer to Ryan's family.

"We've always lived away from them so this gives us an opportunity to be very close for the n...