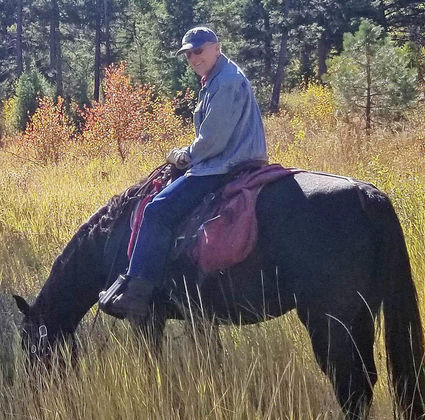 "Nobody made a greater mistake than he who did nothing because he could do only a little" ~E.Burke

SEELEY LAKE - Klaus von Stutterheim, 77, of Seeley Lake, Montana passed away on Monday, March 1, 2021 in his vacation home in Camp Verde, Arizona. He was born in Berlin, Germany on Oct. 4, 1943 to the late Elisabeth and Hans-Heinrich von Stutterheim.

Born into the Berlin Bombing of 1943, growing up in post-war Berlin, witnessing the birth of a new nation, Klaus always was a strong believer in social justice. When he emigrated to the USA at the age of 21, he quickly found his emotional and political home in the Democratic Party. For three decades he was very active in New York City politics and after he retired to Seeley Lake in 2012 he quickly integrated into the political community of Missoula County.

Klaus first came to Seeley Lake on his honeymoon in 1992 and fell in love with the mountains, the Western Spirit and his horse Bandit. With him, he roamed The Bob and spent many nights under canvas.

In all his endeavors he honored and lived his life's motto, changing the world around him for the better.

Klaus is survived by his wife Beate, his sister Renate, and his beloved nieces and nephews Carl Friedrich, Sophie, Richard, Arthur and Teresa. He is preceded in death by his parents and his twin brother Manfred.

His ashes will be scattered in Berlin and New York when travel is again possible. A Celebration of Life is planned for June 26, 2021 at his Ranch in Woodworth Meadow.