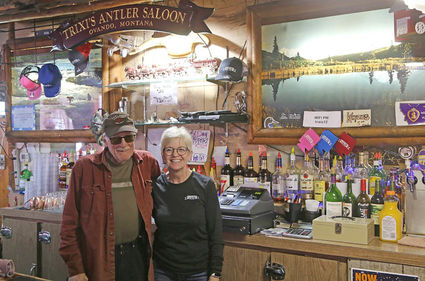 Ray and Cindy Francis are looking forward to enjoying the fruits of their labor as they pass on ownership of Trixi's Antler Saloon to their son Ryan Zavarelli and his wife Tiffanie in April.

OVANDO - Trixi's Antler Saloon will venture into a new phase as co-owners Cindy and Ray Francis pass the bar and restaurant to their son Ryan Zavarelli and his wife Tiffanie April 1.

Cindy said they are excited for Ryan and Tiffanie to take over because it will allow the business to stay in the family for the third generation in a row.

The saloon has been operating in Ovando since 1960. The building was originally an old barrack from Fort Harrison that the original owner Trixi McCormick paid $1 for in the mid-20th century. McCormick, whose real name was Eithel Stokes, was a trick rider and...