Running the line between recreation and conservation 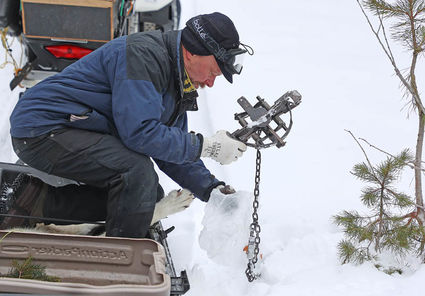 Local wolf trapper Rob Henrekin resetting a trap that was disturbed by a snowmobile. He uses four different foothold traps with a drag for trapping wolves. Every trap is tagged with his contact information and the location, type of set and date set is marked in his GPS so all his traps could be recovered even if he is unable to do it.

Just after sunrise Saturday, Jan. 9, local wolf trapper Rob Henrekin fired up his snowmobile to check his trapline, something he has done every day since the wolf season opened Dec. 15. While he had seen tracks from a pair of wolves Dec. 24, he had not had a single visit to his 40+ foothold traps.

"It is such a rush everyday, even when I don't catch a wolf," said Henrekin. "If I'm just patient and everything is working, they will be back. Whether I catch them or not is unknown but I'll have a visit."

As Henrekin approached one of his dirt hole sets, something didn't look right. He slowed d...