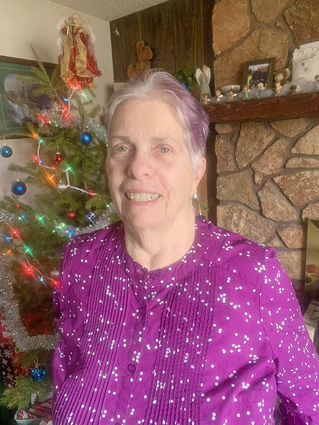 SEELEY LAKE - Sandra (Sandy) Jude Thompson Berry went to be with her Father in Heaven at 5:20 p.m., Feb. 5 in the presence of her husband and oldest son. Before Alzheimer's stole her ability to read, our cherished mom Sandy began each day with an Our Daily Bread devotional and prayer. Our family takes comfort that the Feb. 5, 2021 devotional was Isaiah 41:13, "I am the Lord your God who takes hold of your right hand and says to you, Do not fear; I will help you." She was 73.

Sandy was born Sandra Lea Germaine to Harry R. and Lea Germaine in Chicago, Illinois Aug. 13, 1947. She was raised in Craig, Montana by her loving adoptive parents George E. and Katherine M. Thompson who owned and operated Kay's Place, a bar in Craig. She was christened Sandra Jude Thompson on Easter Sunday 1949 in the Catholic Church in Wolf Creek, Montana. Sandy attended grade school in Craig and attended three years of high school in Cascade, Montana where she participated and lettered in band playing the saxophone. Her senior year Sandy enrolled and graduated from Helena High School in 1965.

After graduation she attended school to become a certified nursing assistant and was employed at St. John's Hospital, where she would meet the love of her life (Tim) while caring for his ailing mother. They fell in love and were married nine months later. This union that began with a first date on Dec. 4th, 1965 produced six loving children (four girls and two boys) and 14 grandchildren. Sandy's nurturing ways made her a natural mother and grandmother and she loved everyone dearly.

When her youngest child entered kindergarten, Sandy went to work for Safeway, where she progressed to deli manager and retired after 23 years of service. She established many friendships at this job that exist to this day. After retirement, Sandy and Tim split time between Helena, Libby, Seeley Lake and Hawaii, where they thoroughly enjoyed visiting and spoiling their children, grandchildren and grand-dogs.

For those who knew Sandy, you would know that she was very much a dog person. If you were one of her children, you would often (but jokingly) question if she possibly loved them more than you.

In 2018, Sandy was diagnosed with Alzheimer's. While devastating news, we were blessed that family was able to care for her and keep her home even as the disease progressed. Tim was her rock and she felt safe in his presence; Tim Jr. has an incredible gift as a care provider and companion with Candy and Jack in support; and Wendy's compassion and kindness were essential for everyone.

Sandy was loving, caring and compassionate and excelled in her roles as a mother, grandmother, teacher, confidant and friend. There wasn't anything Sandy would not have done for anyone and she will be missed dearly by all who knew her.

Cremation has taken place. Due to the ongoing COVID pandemic, services will be held at a later date when the weather is more conducive to an outdoor service, after which she will be interred at the Fort Harrison Veterans Cemetery. Those wishing to honor Sandy can make donations in her name to Hazel and Owen Tyler at 1270 Copper Cliff Drive, Potomac, MT, 59823 or a charity of their choosing. The Tylers operated the Paws Up Safe Home, a no kill animal shelter, that is closing Feb. 28. They will continue to support the animals that were not adopted.