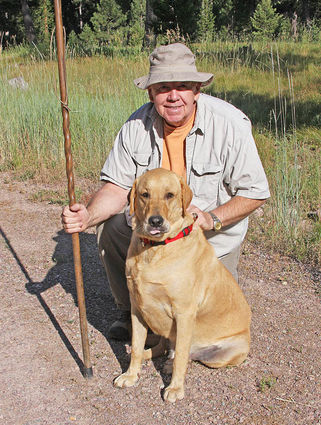 SEELEY LAKE - Last November, we unexpectedly lost our beloved community member Douglas E. Waldron, 75. As many of you know, Doug came to the Seeley Lake area in about the year 2000 after retiring from his 37-year career in law enforcement. He was extremely proud of his position as Chief of Police of Stanhope, New Jersey but was eager to create a new life in Montana which he did successfully.

He loved everything about his new home in Montana, the scenery, the wildlife, the hiking trails and especially the people of Seeley Lake. He often would say, "I can't believe I live here," and he truly meant it. His cabin was his pride ad joy. It overlooked Salmon Lake and it was his church, where he found peace with his Lord.

Doug adored his four-legged companions. He first brought his dog Noah from New Jersey. After Noah passed, he was drawn to a yellow lab puppy he named Moses, and then after the loss of Moses, he rescued Baron. Everywhere Doug went, his companion was there along with him. If you saw Doug traveling down 83 in his black pickup, you might chuckle at the fact that there was little daylight between him and his dog. Especially, Moses, he was always sitting as close to him as possible. Oh, how he loved his dogs.

While here, he also did what many of us never do; he pursued his dreams. Doug became a contributing writer for the magazine, Montana Woman. He began writing books. His first of many was Montana Wilderness Adventure, and later a research project about George Monture, a historical figure of the Blackfoot Valley. Doug especially relished research writing. He often spoke of the benefits of traveling and meeting various folks along his journey to compile information for his book(s). Doug also loved music and bought himself a dobro, a resonator guitar shortly after moving here. A self-taught player, he became good enough to be invited to join an ensemble in the Bitterroot Valley where they recorded a created CD.

If you had the pleasure of knowing Doug, you knew that he epitomized the phrase "random acts of kindness." He delighted in making another person's day by showing up with goodies or flowers. If he knew of someone in need, he wanted to help. Whether it was a fundraiser for a school event or a local family suffering from a tragedy, he wanted to provide support for them. There is no possible way to know of all his good deeds because it was just part of his DNA.

Finally, Doug cared deeply for many individuals in our community. He believed that he created a family here that loved him and those he loved back. If you knew Doug, he thought the world of you, and as his friend, he often spoke highly of each and every one of you. I am certain he will be deeply missed by many. Please stop by for his Celebration of Life at the Seeley Lake Community Hall on March 6, 2021, anytime between 1 – 3 p.m.