Seeley Lake resident to star in MCT's adaptation of 'Shrek The Musical JR.' 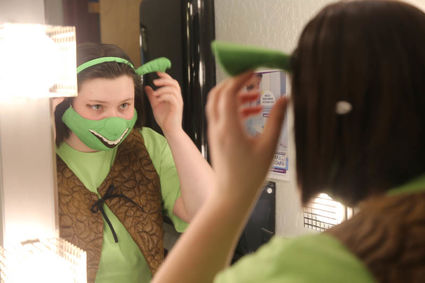 Seeley Lake resident Grace Wilson adjusts her mask as she prepares to go on stage to practice for her upcoming role as Shrek in Missoula Children's Theatre's adaptation of 'Shrek The Musical JR.' The show will be virtually live streamed during certain times Saturday Feb. 20 and Sunday Feb. 21

MISSOULA - Homeschooled Junior Grace Wilson of Seeley Lake has culminated her passion for musical theater as she takes the stage as Shrek in Missoula Children's Theatre's (MCT) adaptation of Shrek The Musical JR. The production will air virtually Feb. 20-21.

This is the first time she is performing without a live audience.

"I think it'll be good because we can still put on a play and ... we can still have people see our performance," Wilson said. "I'm willing to bet that a lot more people will be watching it just because it is streaming. I have grandparents who live in Florida and they're going to be streaming it whereas before, they haven't been able to come."

Auditions took place the third week in December with rehearsals beginning the week after.

Wilson was initially shocked when her mom had told her she had gotten the lead role of Shrek.

"I had to double check it multiple times," she said. "I just expected to be ensemble because ...  there's a lot of good people there who are really talented. ... I couldn't find my name at first because usually I'm at the bottom ... and then I'm like, 'Wait, does it really say Shrek? Am I really Shrek or am I reading this wrong?' So I was in shock for the rest of the day but I was super excited after."

MCT Musical Director Kelsey Seals wrote in an email that Wilson immediately stood out to them during the audition for "her impressive singing chops" and "fearlessness" to do whatever was asked of her.

"She has a fun sense of humor and a command of the stage that made her our choice for the character of Shrek," Seals said. "I am so excited for everyone to stream our show and see Grace and her castmates shine like stars."

Wilson goes to Missoula to rehearse three times a week. While the frequent trips can be time consuming she appreciates the time she gets to spend with her parents in the car.

According to MCT Patron Services Manager Erica Lawrence, the majority of the performers come from inside the Missoula area so Wilson's involvement is unique compared to the rest of the cast. Normally they expect the cast to contain around 60 children but for this performance they had to limit it to around 40 due to COVID-19.

As a whole, the cast is making the final preparations for the performance by practicing without scripts and blocking the entire show including musical numbers.

Wilson has been acting since she was four and has performed in several other youth theatre productions. Her first show was "Goldilocks and the Three Bears" when she attended drama camp at the Taproot Theatre in Seattle, Washington. In her elementary years she performed in "The Wizard of Oz," "Willy Wonka and the Chocolate Factory" and "Beauty and the Beast" at Renton Christian School in Renton, Washington.

When her family moved to Seeley Lake she performed in Seeley Lake Elementary School's renditions of "The Little Mermaid" in 2015 and "A Christmas Carol" as the Ghost of Christmas Past in 2017 and "The Wiz of the West" as Dotty in 2017.

In 2017 she began joining MCT's spring break camps and performed as Mother Gothel in "Rapunzel," the Queen of Hearts in "Alice in Wonderland" in 2018 and Queen Iduna in "Frozen Jr." in 2020.

She not only played Uncle Archibald Craven in SLE's 2019 production of "The Secret Garden," but also Mary Lennox in MCT's version of the show that same year.

Wilson's favorite aspects about acting are the community, the challenges and the ability to channel someone else's perspective.

"I love that through being a character you have to be in tune with ... that character [emotionally] as well as physically," she said. "How they walk, how they talk, how they would hold themselves in a conversation, all of that you have to focus on. I love the challenge of it all between memorizing not only dialogue but [also] lyrics. ... I love how creative you get to be and use your imagination to make a scene come together and how you all have to work together as a team."

Wilson said the most challenging aspect of rehearsing "Shrek JR" has been having to wear a mask during rehearsal. Cast members will have to wear masks during the actual taping of the performance.

"With singing and especially dialogue, you have to pronounce more and you have to speak louder," she said. "And you have to do a lot more body gestures versus facial gestures because you can only see part of your nose up."

Despite these adaptations, Wilson is still grateful to be performing at all in the production.

"We weren't even sure if MCT was going to do plays in general honestly," she said. "Just being able to do a play has been really beneficial to everyone. And it's been really fun because with COVID and everything you were kind of stuck inside for a while not really able to do anything. But now MCT is opening up a little more. ... For me, theater, especially musical theater has been a passion of mine for a long time so I was really thankful that we were able to actually put on a play this year."

While Wilson and Shrek come from entirely separate worlds, she has found a personal connection between herself and her character. 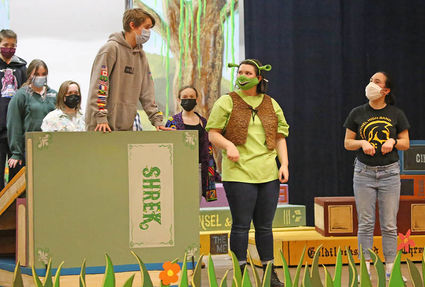 "I'm already more isolated being in Seeley and being homeschooled," she said. "And so I think that has helped with my character in Shrek because Shrek lives on a swamp [and] didn't really feel like he needed to have people around him and he was okay with that. And I kind of went through something similar to that. I found a youth group in Missoula that made me realize like, 'Hey, maybe it is okay to have friends.'"

Wilson appreciates Alpine Artisans for helping fund her performing arts experiences through grants. She encourages other kids interested in getting involved with the arts to apply for their Youth Grants.

The musical lasts roughly an hour and 15 minutes and virtual tickets cost $10 per device plus fees. These performances can only be viewed during the allotted time so ticket holders should not expect to rewatch the show once it ends.

Tickets for the performance can be purchased at https://www.showtix4u.com/event-details/44173?fbclid=IwAR1P1aW6dYQfRpZ-b_AXh_BnDd-5VIha0wjsqdKj5mjlrRDIPR7ul2e5djY.