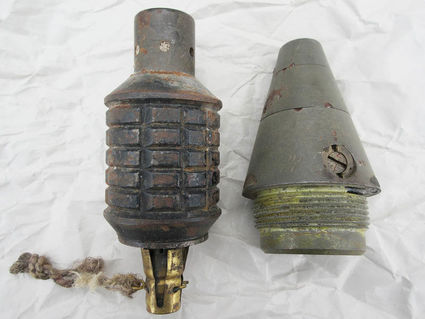 Resident Cheri Thompson discovered a live Type 91 Japanese frag hand grenade and an artillery fuze that her father had brought home from World War II. The devices were amongst her family's memorabilia which contained items going back generations.

SEELEY LAKE - Resident Cheri Thompson found an explosive secret while she was digging through her family's relics. Amongst the familial treasures were a live Type 91 Japanese fragmentation grenade and an artillery fuze which came from her father's World War II memorabilia. She immediately turned over the items to Robert Parcell, Missoula County Sheriff's Office Sergeant and retired Marine Colonel, who brought it to the Explosive Ordnance Disposal (EOD) in Missoula.

Thompson's father Ivan Odom joined the Air Force in February 1943 and was ordered to return home in December 1945. Thompson sai...