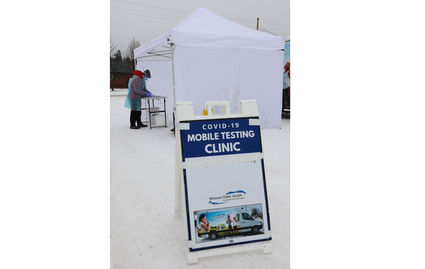 Missoula City-County Health Department testing employees prepare for the weekly COVID-19 Mobile Testing Clinic in the parking lot of the Seeley Lake Community Foundation building. The Clinic is open from 2-4 p.m. every Tuesday. All tests are FREE and same-day drive-up testing is available. Call 406-258-INFO (4636) and select option 2 to schedule an appointment OR drive up to an open mobile clinic for same-day testing.

MISSOULA COUNTY - When one positive case of COVID-19 has the power to disrupt the operations for an entire institution, clarifying what is considered an active case versus a positive test can be important when determining the contagiousness of an individual.

According to Cindy Farr, Missoula City-County Health Department COVID-19 incident commander, a positive test is someone who tests positive for COVID-19 while an active case is someone who has tested positive and is still in the contagious period. Those considered contagious go from active to recovered once they have gone 10 days since testing, have had an improvement in symptoms and have had no fever for 24 hours.

After this point they are no longer considered contagious and can be released from isolation.

Individuals can test positive for two to three months after contracting the virus. According to the Center for Disease Control, if a person contracts COVID, they are considered immune for up to 90 days after they have recovered from the first bout of the disease.

Someone who continues to test positive past the isolation period is still considered recovered because it has been determined that he or she is no longer contagious. If an individual re-tests as positive within the 90-day recovery window they would not be required to isolate.

Farr said there does not appear to be a correlation between symptoms and contagion. Those who have minor or no symptoms at all can be just as contagious as someone with severe symptoms. 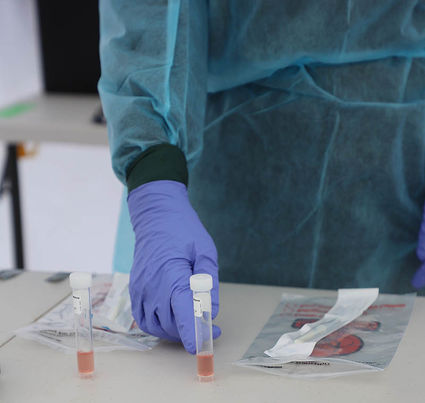 A testing employee points to the transportation medium that the swabs are stored in for transport to the testing facility. Patients requesting a test are asked to swab themselves to limit exposure for those who are doing the testing.

When it comes to contact tracing, organizations and individuals are free to notify potential contacts but the health department is mandated by state statute to notify contacts of a confirmed case. According to Farr, in most cases close contacts are contacted within 36 hours of the department being notified of a case.

For individuals who are showing symptoms but are hesitant to get tested because they want to avoid quarantining and affecting their local institutions, the department recommends that everyone showing symptoms "do the right thing" and get tested and isolate themselves until they are deemed no longer contagious.

"The only way to stop the spread is to remove a contagious person from healthy individuals," Farr wrote. "We encourage everyone to recognize that we are in a global pandemic. A portion of the population is going to test positive for the disease and we should not stigmatize one another based on whether they catch COVID-19."