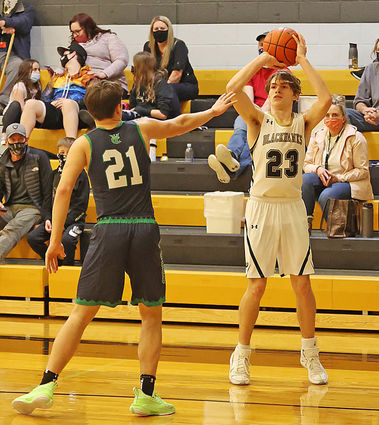 Sophomore Jason James sends in a three pointer. He scored 20 points in the game against Valley Christian including three three-pointers.

SEELEY LAKE - The Seeley-Swan Blackhawks started their week off with a win against Victor but then fell to Drummond and Valley Christian. They are now 3-6 for the season.

The Blackhawks traveled to Victor Jan. 28 and brought home a solid win over the Pirates outscoring them in every quarter. The final score was 70-55.

Sawyer Shelmerdine racked up 23 points from 8 two-pointers, 1 three-pointer and 4 free throws to lead the Blackhawks. Two more Blackhawks scored into the double digits with Chase Haines scoring 16 and Quinlan Ream 15. Both of them each had 2 three pointers.