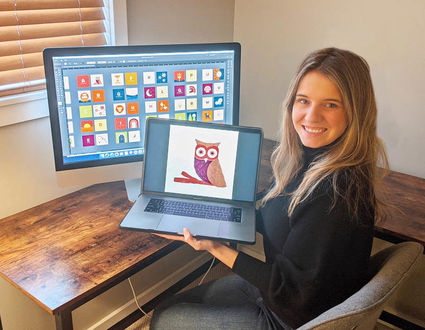 Seeley-Swan High School graduate Cassidy Meade presents the final digital copy of her new book, "A is for Athena: The ABCs of Greek and Roman Mythology." She has always wanted to be a children's book illustrator and now is doing so on her own terms.

WHITEFISH, MONTANA - Children can now learn about Greek and Roman mythology while learning their ABCs thanks to Cassidy Meade's new book, "A is for Athena: The ABCs of Greek and Roman Mythology."

The paperback book is organized in an ABC format with every letter attached to a Greek or Roman mythological figure. Every page also contains an illustration representing the associated figure. Meade said it is targeted towards younger children mostly between the ages of five and eight.

Her passion for the book came from her childhood dreams of being a children's book illustrator. She began develop...