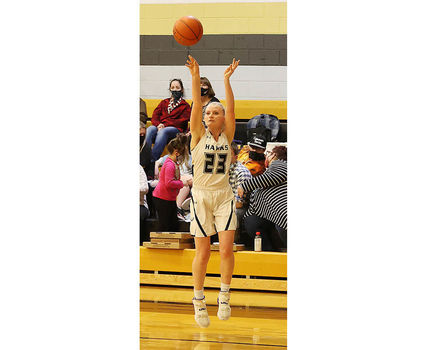 Senior Aspen Conley sends in a three-pointer to take the lead in the third quarter. She hit three three-pointers in the game on her way to 14 points.

SEELEY LAKE - The fans were in for a special treat Jan. 22 as the Seeley-Swan Lady Blackhawks took on the Thompson Falls Blue Hawks. Lincoln was originally scheduled but due to a lack of available players they had to cancel. The Blue Hawks proved to be a much more formidable match for the Lady Blackhawks.

The Blue Hawks struck first and the teams went shot for shot early in the game. The stalemate didn't last long though as the Lady Blackhawks went cold. They were taking plenty of shots but couldn't hit their mark.

The Lady Blackhawks' cold streak lasted well into the second quarter when it...