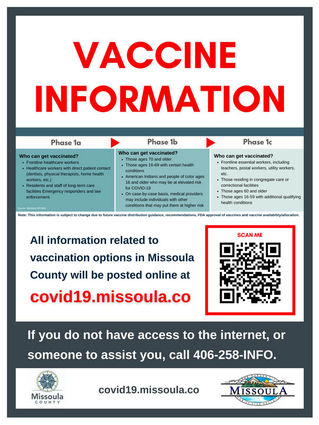 Vaccination information for Missoula County as of Jan. 25.

MISSOULA COUNTY - The Missoula City-County Board of Health (MCCHD) unanimously voted to revise their COVID-19 mitigation requirements for restaurants, bars, breweries, distilleries and casinos during their meeting on Thursday, Jan. 21. These revisions included lifting the 10 p.m. closing time, changing capacity to the degree necessary to ensure six-foot distancing between groups and increasing the number of people at a table from six to eight. These changes went into effect Jan. 22.

Missoula City-County Health Officer Ellen Leahy said that while these revisions will be implemented, she wants to make it clear that staff is not recommending removing the countywide mask mandate, changing group size for events or event planning requirements. The 50% capacity also still applies to retailers and gyms.

"Our planning assumption is that we are going to see more disease and it's only the magnitude and the timing of it that is in question," she said.

The revisions for food and drink establishments have been considered since November 2020 when a group called Revive Missoula's Bars and Restaurants approached MCCHD hoping to find a middle ground that would allow bars to be open later at night. The group is made up of roughly 70 bar and restaurant owners in Missoula.

The reason they want to extend hours is that bars tend to conduct most of their business between 10 p.m. and midnight.

The extended hours will also remove the enticement for residents to travel to neighboring counties where bars can stay open until 2 a.m.

After receiving a proposal from Revive Missoula, the Board decided that bars and restaurants should be treated the same way regarding regulations. This classification would allow bars to only have seated service to prevent different groups from crowding around a bar.

Leahy said this change in treatment is also intended to diminish the spectrum of what is considered a bar and a restaurant that serves alcohol.

Environmental Health Director Shannon Therriault talked about the Department hiring environmental health compliance specialists to follow up with businesses, large and small, clarifying which specific places are considered eating and drinking environments and how mask wearing can be enforced accordingly.

City Council Member Amber Sherrill said she felt like these changes were thoughtful and that they were hitting a good balance for everyone involved.

Revive Missoula member Erika Peterman expressed appreciation for the discussions the group had with the Board of Health and are in agreement with the recommendations that were made.

Following discussion the board adopted the revisions as proposed.

During her report, Leahy said that active COVID cases are spread among a range of age groups with the majority in the 20-29 and 30-39 age categories.

She then discussed the County's three key indicators regarding the pandemic which are epidemiological, resource and community mitigation.

The County's epidemiological profile has stayed the same since last week with the incidence rate improving while transmission and test positivity rates have worsened. Leahy said that mitigation measures being taken by the County are helping contain a pure exponential spread, but the time to cut the number of cases in half is taking longer.

For resource indicators, test turnaround time has improved. The County was previously unable to test close contacts of confirmed cases due to reaching capacity but they have since seen less demand although it is regrowing.

Hospital availability and initiated case investigations have stayed the same. Leahy said that residents should keep in mind that when cases descend, hospitalizations do not descend as deeply because some people may enter the hospital later in their actual active case.

MCCHD initially enacted the bar and restaurant restrictions when the County's incidence rate had surpassed 25 per 100,000 people. The rate peaked at 87 in late November and has since gone through multiple upticks. As of Jan. 21 the rate was at 38 which is equal to the state average.

The Board will begin to reconsider restrictions once the rate falls below 25 for two weeks. Their next regular meeting is scheduled for Feb. 18 at 12:15 p.m.