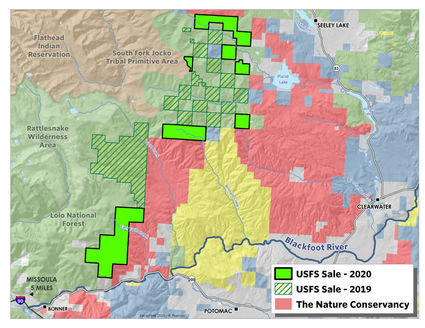 The transition of The Nature Conservancy land to the US Forest Service.

The Nature Conservancy's (TNC) sale of 12,039 acres of former industrial timber land to the U.S. Forest Service will allow for more public access according to a press release. The sold area was part of a 2014 purchase representing the last industrial timber land in the Blackfoot. The land partially covers the Seeley Lake Ranger District as well as the Missoula Ranger District.

The map was previously characterized by a checkerboard-like pattern representing public-private ownership created over a century ago. TNC's Western Montana Land Protection Director Chris Bryant said in a press release that the pattern made managing the land difficult and costly.

"This sale is the result of nearly 20 years of community-based, public-private partnership aimed at eliminating the ownership mix that made management of these lands challenging," Bryant said in a press release. "Outdoor enthusiasts, wildlife and local communities all benefit from the results of this partnership."

The land is located in the upper portions of the Twin Creek watersheds below Wisherd Ridge as well as west of Placid Lake. This property is near the border of the Rattlesnake Wilderness, the Rattlesnake National Recreation Area, the Confederated Salish and Kootenai Tribe's South Fork Jocko Primitive Area west of Placid Lake. It was identified as a priority through a public process, in partnership with the Blackfoot Challenge.

In addition to wildlife and recreation, the upper Twin Creeks area houses stands of trees that are unusual for the region. Stands include Western Red Cedar, Pacific Yew and Mountain Hemlock. According to the press release, these stands are relics of a "wetter past." They likely survive because of heavy snows on Wisherd Ridge which create wetter than average conditions.

"The big deal for me ... was anytime you can move from checkerboard to contiguous ownership, it's a benefit," Carver said. "Because if there's different philosophies in how the land should be managed, those always [require] some extra communication on a day-to-day basis. ... Our communications with [The Nature Conservancy] have been really good, but public ownership versus private ownership brings different end objectives."

Carver said the snowmobile permit was transferred before the acquisition took place so the grooming process currently taking place should not be affected. Otherwise users will not see a lot of change in the area.

The biggest incoming difference Carver sees over the next couple of years is switching locks on existing gates. Moving forward, many collaborative discussions will need to take place among members of the Seeley Lake District to decide what may or may not need to happen up there.

"Thanks to The Nature Conservancy and their commitment to conservation, public access and fostering collaborative partner relationships, this acquisition will connect important habitat, secure stream connectivity, and improve management ability and efficiency," Lolo National Forest Supervisor Carolyn Upton said in a press release. "We look forward to managing this land on behalf of the public for generations to come."

This is the second of two transactions with the USFS intended to protect habitat and public access on over 28,000 acres. The project was made possible through the passing of the Great American Outdoors Act as well as the Land and Water Conservation Fund.