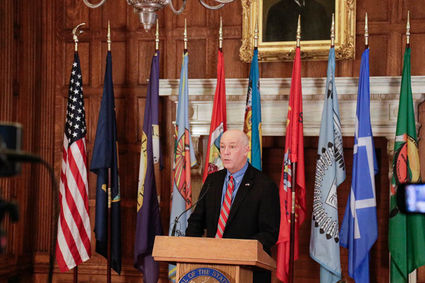 Gov. Greg Gianforte releases his plans for the state's response to COVID-19 at a press conference Tuesday. His plan focuses on expanding vaccine access for the most vulnerable Montanans and offering incentives, not mandates. He said he will rescind the statewide mask mandate, but only after certain criteria are met.

HELENA – During his first press conference of 2021 Tuesday, Jan. 5, newly elected Montana Governor Greg Gianforte announced his plan to eventually rescind the statewide mask mandate after vaccines are distributed. He said that he is also waiting to receive legislation that will protect businesses, schools, places of worship and nonprofits from lawsuits so long as they "make a good faith effort to protect individuals from the spread of the coronavirus and follow clear public health guidelines."

Gianforte said he will issue new directives and guidance to replace the existing ones. Some directives will be revised while others will be removed entirely.

"I believe providing incentives and promoting personal responsibility are more effective than imposing impractical mandates," he said. "Many of these guidelines are just impractical in terms of implementing them so we're going to shift to ones that are clearly understandable, that allow us to balance the economic impacts with the public health need to protect our neighbors."

While Gianforte intends to remove and alter statewide restrictions, local governments will have the choice to maintain or tighten their restrictions as they see fit.

Missoula City-County Health Officer Ellen Leahy said she does not anticipate recommending rescinding the County's rules at the upcoming Board of Health meeting Jan. 21. Missoula County had established a mask rule in July before the statewide mandate was enacted. It was recently revised and re-adopted by the Board in December. She said their intention during the revision was to keep the restrictions in place at least through the shifting administration.

"Because the mask is worn to protect other people and there are a minority of people that don't wear a mask, that leaves other people unprotected even if they do wear their own masks," she said. "And so I think there is a role for a mandate to continue and to be able to enforce on that minority that may choose not to wear a mask. ... It's too soon to place our progress at risk because some people will not take the personal responsibility that the governor is thinking of."

Leahy said the Missoula area has "a really good [mask wearing] norm" among schools and businesses because of the community's cooperation.

Gianforte also addressed the shift in Montana's new vaccine distribution plan which saw a change in Phases 1b and 1c. Phase 1b used to include frontline essential workers like first responders, those in education and childcare, and Postal Service workers. Those groups have now been moved to Phase 1c which is expected to take place between mid-March and July. Those in congregate care and correctional facilities were also originally in Phase 1b but they have also been moved. Vaccine distribution is still in Phase 1a.

This change in prioritization was the result of the state's anticipated vaccine allocation being reduced by the federal government. Gianforte said with the change he wanted to "focus on the most vulnerable in our communities" and minimize deaths and hospitalizations from the virus.

Despite his plans to rescind certain policies, Gianforte reminded residents that the pandemic is still present in the state.

"I'll be clear, we are not out of the woods yet," he said. "We continue to see deaths. We continue to see infections. That's why it's imperative that we continue the rollout of this vaccine and focus on the most vulnerable in our communities."