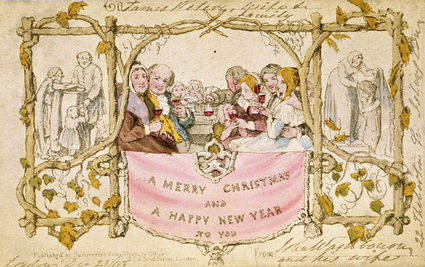 Historical purists might claim the first Christmas card was the elaborately decorated, 33 inch by 24 inch three-panel manuscript given to King James I of England (aka King James IV of Scotland) in 1611. The center panel contained a rose with a Christmas and New Year greeting around it, while the side panels had four poems and a song.

Among non-purists, Sir Henry Cole is more commonly accepted as the originator of the Christmas card in 1843. According to the standards of Victorian England, it was impolite not to answer one's mail. Cole, apparently a man with many friends, dreaded the task o...