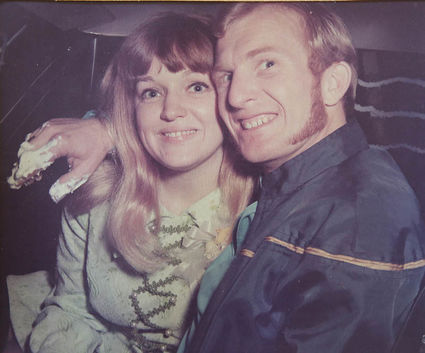 Larry, 26, and Gwen, 19, were married Nov. 29, 1970 at La Habra Christian Church, California. Here they are pictured in their get-away car after their friends and family put shaving cream on the handles, wrote "Just Married" on the back and tied cans to the back.

SEELEY LAKE – While serving on a Naval ship in Vietnam, Larry Busby received a letter from a Californian woman he had never met.

"It was something to receive that kind of a letter from Gwen," said Larry who was from Oklahoma. "All the guys were envious. I was walking in tall cotton."

Larry followed the instructions in the letter that said, "Remember where you were when you open the letter so when you return, you can tell me." Upon his return to the states a few months later, he met Gwen. They were married after dating for a year and are still married today, 50 years later.

What a nice synopsis of a long-standing, loving relationship. As my big sister, Gwen set many standards for me throughout our formative years, and finding solid relationships with both God and a life-long spouse were top of the list. Congratulations to an awesome couple—may you be a shining example to your Montana community as well!