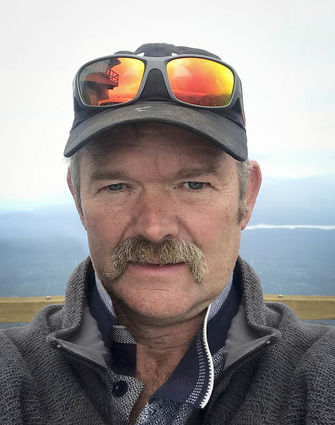 SEELEY LAKE - On Sept. 12, Wayne David Cahoon, beloved husband, father, Papa, brother, uncle, friend and Follower of Christ, closed his eyes on earth and opened them in heaven. He is rejoicing now with Jesus and so many others that have gone before.

Wayne, born on Jan. 20, 1961 to Theresa and Levi Ralph Cahoon is the seventh (perfect number he would always say) of eight children.

He was raised on his family ranch at Placid Lake, attended Seeley Lake Elementary, Seeley-Swan High School and Pillsbury Baptist Bible College, where he won a National Championship in wrestling.

He believed in always doing his best. He played every sport, every game and did everything with all his heart.

In the early 1980's, Dad and his brother Mark began raising and training clydesdales. One of the "Cahoon Clydesdales" was purchased by the "Budweiser Clydesdale" farms, it was one of their best. Four more went to North Pole, Alaska and six went to Kauai. Each pulled fancy carriages full of tourists.

Dad was a huge part of Mission Mountain Messengers as a singer, song leader and board member. The group traveled and sang in churches, high schools and colleges around the northwest and Canada. They were even asked to sing the National Anthem for a Mariners game.

As a child, Dad repaired log buildings on the family ranch. In his 20's, he bought land south of Seeley Lake and started his own log home company. That later became a place where he enjoyed working side-by-side with his sons.

In June of 1989, he proposed to his true love Sandee and they married Aug. 26. They were the first couple to be married at Mission Bible Fellowship Church, a church that he helped to get started not long before. In the years to follow, they were blessed with four children and are extremely proud of each of them (3 John 1:4), ultimately naming their Brand "Rocking C4" because the four Cahoon kids rock.

His greatest joy was spending time with his family. He would take us anywhere and do anything with us. Whether it was football, golf, hiking, snow biking, skiing, cutting hay, hunting, singing at home and at church, coaching together, working, basketball in the backyard or just watching sports on TV, he loved spending time with us. When grandkids came along, he liked the time together even more. He always encouraged us to try new things and cheered the loudest for us in everything we did.

His passion for youth, kept him spending much of his time with young people in youth groups, Bible studies, teaching Sunday School and youth rehab programs, singing and coaching sports. He coached two State Champion Golf Teams and won Golf Coach of the Year three times.

Dad was great at striking up a conversation with just about anyone and could put a smile on anybody's face. He loved people and he touched many lives of all ages because he cared deeply about each person he met and they knew it.

The last message that Dad taught us he titled, "What Is Heaven Like?" In it he described heaven. For him, to know that we believe in Jesus, and will be in heaven together brought him great joy. His faith in Jesus was evident to all in the way he lived. He would say, "life here on earth is so short but heaven is for eternity." His favorite verses always came into play in his messages...Trust in the Lord with all your heart, lean not on your own understanding, in all your ways acknowledge Him and He will make your path straight (Proverbs 3:5-6)... If you confess with your mouth Jesus is Lord and believe in your heart that God raised Him from the dead, you will be saved (Romans 10:9).

Jesus, Sandee, his children and grandchildren are the loves of his life: David (Bekah), Chelsea, Christian (Holly) and Joshua; grandchildren: Chase, Kaylee, Kyler, Kaycen, Iyla and Kendall. He is greatly missed by all of us, but to know that he believes in Jesus, is alive in heaven and that we will see him again, is our greatest comfort.

Our work is never routine, our labor is never wasted and our legacy is capable of outliving us. Between this day and the day you take your last breathe, invest your life in that which matters most, Jesus. Our life on earth is short compared to our life in heaven, so, we do not say goodbye, but rather, see you soon.

Live your life in such a way that after you are gone, it keeps on going.

A Celebration of Life is being planned.