The 2020 inductees to the National Toy Hall of Fame: Jenga, Baby Nancy and sidewalk chalk.

COVID-19 has cast its increasingly large shadow over Christmas. In many homes one or both parents are out of work and finances are crushingly tight. Yet children are still hoping for a mound of presents under the Christmas tree. Perhaps struggling parents can gain some insight from the National Toy Hall of Fame.

Originally housed in Salem, Oregon and later moved to the Strong National Museum of Play in Rochester, New York (now simply called The Strong), the Toy Hall of Fame began honoring toys in 1998-99. To make up for lost time apparently, they inducted 17 at their inaugural event, though two to four inductees subsequently became more the yearly norm.

Did you recognize all of them? That is because the Toy Hall of Fame is not concerned with what item was most popular in a given year; it is concerned with staying power. A toy must meet three main criteria before it is considered for induction:

1. Icon-status - the toy is widely recognized, respected and remembered

2. Longevity - the toy is more than a passing fad and has enjoyed popularity over multiple generations

3. Discovery - the toy fosters learning, creativity or discovery through play

A fourth attribute can occasionally trump the other three – innovation, i.e., the toy profoundly changed play or toy design.

Baby Nancy, one of the 2020 inductees, is an example of that characteristic. Launched in 1968, Baby Nancy was a Black baby doll with authentic Afro hair and ethnic features. The California community-owned company Shindana Toys created the doll. A counterpoint to the Watts riots in Los Angles, the company's stated goal was to raise Black consciousness and improve self-image. The doll quickly became a best-seller in the Los Angeles area and went nationwide after that. Although Shindana Toys disbanded in 1983, Baby Nancy revealed the need for ethnically correct dolls and as such she earned her place in the Toy Hall of Fame.

The other two inductees for 2020 were the building (and collapsing) game Jenga and sidewalk chalk. According to the Hall of Fame presenters, sidewalk chalk traces its origins back to primitive cave art.

As for chalk's future, Chief Curator Christopher Bensch said, "There are few limits to what kids can do with chalk. Every sidewalk square, patio and driveway holds the potential for a work of art, a winning game of strategy and cleverness, or a demonstration of physical agility, poise and balance."

That is one of the striking things about the Toy Hall of Fame, many of the chosen toys are so simple, and yet each generation of children continues to have fun playing with them. Granted, some of the inductees such as bicycles (2000), Lionel trains and Easy-Bake Ovens (2006), dollhouses and swing sets (2016) may be too expensive for pandemic-squeezed budgets. But others such as jacks and jump ropes (2000), silly putty (2001), kites (2007), balls (2009), playing cards (2010), hot wheels cars (2011), the Uno card game and Magic 8 Ball (2018), coloring books (2019), or some among the original inductees listed above are inexpensive items.

Even simpler, one of the 2005 winners was the cardboard box! The rationale behind that decision: "Over the years, children sensed the possibilities inherent in cardboard boxes, recycling them into innumerable playthings. The strength, lightweight and easy availability that make cardboard boxes successful with industry have made them endlessly adaptable by children for creative play. Shoe boxes serve as ideal settings for scenes and dioramas. Small boxes take on alternate roles as dollhouse furniture. Wheels drawn on the side turn a box into a car. Really large boxes-from washers, stoves, big-screen televisions or refrigerators-can offer children even greater opportunity for creativity. With nothing more than a little imagination, those boxes can be transformed into forts or houses, spaceships or submarines, castles or caves. Inside a big cardboard box, a child is transported to a world of his or her own, one where anything is possible."

Another surprise is one of the 2011 inductees – the blanket. Similar to their words of praise for the creativity inherent in a cardboard box, Toy Hall of Fame curators extolled the potential of the humble blanket.

"It fills in for a king's robe, a bride's veil, a superhero's cape, a Roman soldier's cloak, a princess's flowing gown and a wizard's flying carpet. Thrown over a table, it forms a tent; draped around two chairs, it becomes a fort; on top of the carpet, it serves as a safe island surrounded by sea monsters. In puppet shows, the blanket substitutes for theater curtains; for a magician, the blanket conceals the secrets of the show. And in tug-of-war, the blanket gets top billing. It is also suitable for tossing toys in the air or for parachuting them back to earth."

The grand prize for simplicity however has to go a 2008 inductee – the stick! The curators hailed it as possibly the world's oldest toy and "an endless source of make-believe fun." Not to mention it cost literally nothing. 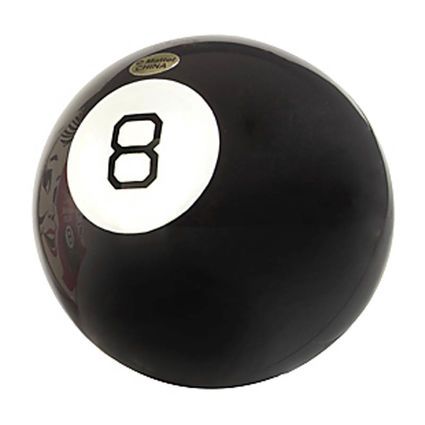 The Magic 8 Ball provides 20 different phrases to yes or no questions.

Admittedly, a child might not be overjoyed to find Santa left a stick under the Christmas tree. But an old blanket (or discarded sheet or large piece of cloth) with a note giving the child permission to do whatever their imagination dictates with their special play blanket might be appealing at a certain age. Nesting cardboard boxes with the child's name on the side of each and a few use suggestions might spark a child's own creative construction ideas. A set of colorful papers (maybe from old magazines) cut to paper airplane folding size might have a certain attraction for some children. The paper airplane was a 2017 inductee. Soap bubbles, a 2014 Hall of Fame winner, take on different forms in the winter when the temperature drops below 32 degrees. The internet offers numerous instructions for creating frozen bubbles as well as recipes for homemade bubble concoctions.

Older children wishing for video gaming sets or more modern toys are probably also old enough to understand why those items can't possibly fit into the budget this Christmas. They might be surprised at how much fun they'll have playing some of the board games that made it into the Toy Hall of Fame such as checkers (2003), Scrabble (2004), The Game of Life (2010), Dominoes (2012), chess (2013), or Magic: The Gathering (2019).

Remember, there is a reason all the items mentioned above became inductees. Generations of players continue to find them fun. They have staying power.