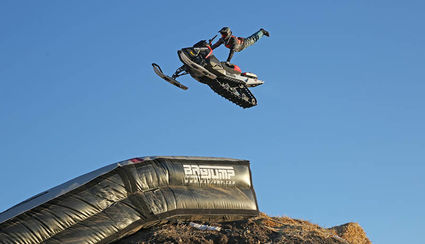 Professional backcountry rider Caleb Kesterke coming in for a landing on his jump bag after practicing one of his seat grab tricks Dec. 2 at his freestyle complex at Clearwater Junction.

GREENOUGH - "I didn't know snowmobiles could fly," said four-year-old Olivia Bourne in awe as she watched professional riders Seeley Lake native Caleb Kesterke and Kyle Saxton of Big Fork, Montana doing freestyle snowmobile tricks more than 30 feet in the air. While "flying" is a huge rush, both Kesterke and Saxton agree that training at Kesterke's freestyle campus at Clearwater Junction in the off-season is helping them learn tricks that they can incorporate into their backcountry riding this winter.

"I'm 100% invested in being the best I can," said Kesterke. "I wouldn't say this is worth it for most people but it is for me because of my drive to be the best. With this setup, we can ride all summer long."

Kesterke and Saxton grew up riding snowmobiles together in the backcountry. They are now both professional backcountry riders. This is Kesterke's second year as a Tier 1 sponsored rider for Polaris. This fall, Saxton was added to the roster for Arctic Cat's Black Cats backcountry team.

"It is really good to train with other people. You are pushing each other and progressing together," Kesterke said. "It is just like any other sport. Even though this is an individual sport, having someone else is huge to help figure out what you are doing wrong.

Saxton added it has helped him build confidence as well.

Kesterke said he felt he stalled out in his progression as a backcountry rider.

"Every time we would look for jumps in the backcountry it was for the next bigger one," Kesterke said. "That was the only way you could progress."

While Kesterke would regularly jump 150-200 feet to the knuckle, the start of the down slope, he couldn't do any freestyle tricks while airborne. It just wasn't possible to get enough jumps in to learn the tricks because building a jump in the backcountry sometimes takes hours of shoveling and after hitting it a few times it needs to be rebuilt.

Kesterke decided the only way to progress was to build a freestyle compound. A year and a half ago he started doing research and talking to people in the sport who gave him a lot of different advice.

"It was a really long process. A lot of it was just me not knowing what I'm doing," Kesterke said.

Through a lot of trial and error, Kesterke set up his own freestyle jump at Clearwater Junction on his family's land. Kesterke purchased a pre-built, metal Super Kicker ramp from another freestyle rider. He built the landing by piling dirt and hay on top of a storage container. He also installed old football turf for the track. He estimates he has about 400 hours and $65,000, including the cost of his freestyle sled, into his freestyle compound.

"It is 100% construction wages or will be," said Kesterke and laughed adding he has no sponsor support for this.

Kesterke tried it out a few times last winter. When he started he pushed the ramp tight to the hay. Even though he was barely getting his sled off the ground, he said he couldn't do much because the landing was so hard.

"The landing geometry was so wrong," he said.

Kesterke spent eight days in a tracked skid steer to double the width of the landing and build it up to its current height of 20 feet. He also gave it a steeper slope to soften the landing and purchased an air bag as a safety measure.

Kesterke describes landing on the air bag "like jumping off the top of your house and landing in a bouncy castle."

However he added it still hurts and there are still a lot of ways to get injured, especially if the rider doesn't land in the middle to lower two-thirds of the bag.

"It lowers the risk but doesn't diminish it by any means," Kesterke said. "I always tell kids to learn to do backcountry riding because it is the same amount of fun without the risk."

Saxton wasn't planning on getting into the jumping until Kesterke invited him to come ride. He traveled to Minnesota to purchase his freestyle sled, something he also purchased without sponsor support.

Their sleds are specific to freestyle riding and modified to ride on dirt. Each snowmobile has a shorter track and wider skis than their backcountry sleds. The sleds are also equipped with wheels in the skis, a radiator with a fan mounted on the back for cooling, a grab seat and different handle bars for tricks. Even though the sleds are modified for riding without snow, Kesterke and Saxton estimate they spend 25% of their time maintaining their sleds to keep them operational.

Since neither Kesterke nor Saxton knew how to do tricks and they didn't have anyone to teach them, they started watching videos and trying to repeat what they saw. They started with the Knack, a trick that requires the rider to turn and look while in the air, taking one foot off the board.

"It barely counts as a trick but that is where you start – both hands are [on the handle bars], one foot is on the sled," said Kesterke. "Even that took quite a while to figure out because it was so new leaving the sled."

Now they are working on seat grab variations, the can-can and heel clickers.

Professional backcountry riders Caleb Kesterke (front) and Kyle Saxton pose with their freestyle sleds in front of the 20-foot tall jump out at Clearwater Junction. The sleds have wheeled skis and a radiator fan on the back to keep it cool while riding on the dirt along with other modifications. They wear a neck brace, mouth guard, chest protector, knee braces, motto boots, helmet and padded shorts while jumping. Kesterke said there is such a steep learning curve that only someone really experienced should hit a jump like this. Saxton is the only other rider he has allowed to train at his facility so far because of the liability.

They started learning seat grab variations a week and a half ago. The first thing they did was grab the seat. Then after 50-100 hits doing that then they started moving their legs back a little bit at a time until eventually they reached full extension with their legs off the sled.

"It feels really slow but after 500 hits you see progression," Kesterke said.

"It is learning the muscle memory and feeling comfortable with that and then moving on to the next motion," said Saxton.

Saxton estimated they hit the jump 300-500 times in a day, versus hitting 20 jumps in the backcountry on a really good day.

"It is hard to really get comfortable on ramps in the backcountry because all you ever do is see how far you can go or how big you can go. This you have one distance – you can't go big or small. That allows you to focus on what you are doing with your body on the sled."

Kesterke added this training is helping him gain awareness in the air, working on risk management and keeping everything fresh. Both he and Saxton are looking forward to taking their tricks into the backcountry this winter.

"It's pretty thrilling [to be in the air]. Besides jumping sleds or dirt bikes, there is really not any feeling like it," Kesterke said. "It is like this weightless feeling of being calculated and conquering risk."