Hunter numbers at the FWP Darby, Anaconda and Bonner Check Stations were lower than average, partly a result of reduced staffing and hours of operation due to COVID operating procedures. Those that stopped through the stations reported above average success in some places. Hunters checked at Darby enjoyed the highest success (7.8%) since 2013 and at Anaconda (9.8%) in more than 20 years. Hunter success at Bonner climbed in the last two weeks to 8.3%, down only slightly from last year.

"We didn't know what to expect this year, with all the influences of the pandemic at play, alongside the usual curveballs that weather can throw at hunters," said Mike Thompson, FWP Region 2 Wildlife Manager. "All in all, we can say that nothing unusual stood out in this harvest sample, which tends to represent hunting effort on public lands."

As far as total animals checked at the region's three stations, harvest levels at Darby were on par with the past three years, totaling 169 elk, 29 mule deer and 72 white-tailed deer.

Harvest levels at Bonner were down from recent years for all three species (35 elk, 31 mule deer and 354 white-tailed deer), though whitetail harvest increased in the past two weeks to finish at 97% of last year's tally. 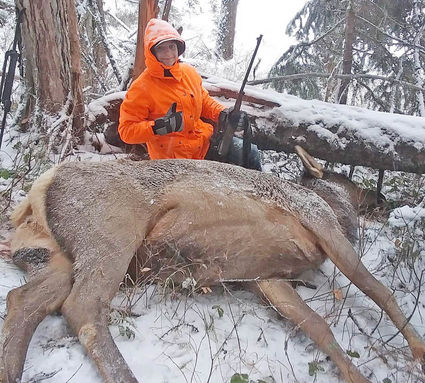 Aiden Posthumus of Seeley Lake shot this cow elk on the Bandy Ranch with a 300 Savage that has been in the Posthumus family for five generations. This was Aiden's third year hunting and first animal harvested. Aiden's father Jeff and family friend Jeff Farra, who were hunting with him, were impressed with how calm he was and how he handled it. Even though they saw a bull, Aiden said he didn't feel confident enough that he could get a good clean shot so he passed it up and went for the cow instead. She only walked 40 yards before dropping. Aiden recruited a little extra help to pack her up the steep hill. The Posthumus family is proud of Aiden and thankful for a great harvest and great friends that helped get it out of the woods.

At Anaconda, harvest levels for elk (35) were higher than last year's, despite the fact that the check station was closed in the third weekend due to illness. The mule deer (16) and white-tailed deer (26) harvests at Anaconda were lower than last year, but within the normal range.

The B Licenses are almost exclusively valid on private lands, and in some cases on adjoining DNRC lands outside the National Forest boundary. DNRC lands within FWP Wildlife Management Areas are specifically closed to the extended elk season.

The extension is due to relatively low elk harvest in places where elk tend to congregate and cause private land damage over the winter months. The decision to extend the elk season for these B License holders was made in accordance with the Administrative Rules of Montana (12.9.1105).

"Relatively mild weather was a big factor in the low harvest in these areas, and hunter interest fell off when the elk weren't moving," said Thompson. "By extending the season for Elk B license holders in these areas, hunters will be able to take advantage of elk movements into stored crops and hay as the winter comes on. It will be a help to private landowners and to elk management by putting harvest pressure on elk that are causing problems and by leaving elk on public land alone."