Businesses address the inside effects of COVID-19 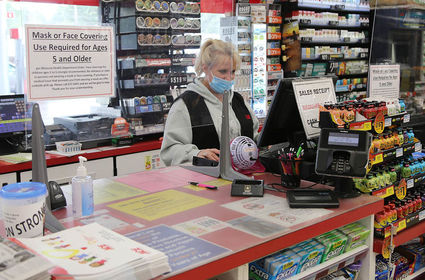 Lynnette Loney works her position at Rovero's behind a protective shield intended to prevent the spread of COVID-19. Several local businesses have had to adapt their operations to adhere to shifting of regulations.

MISSOULA COUNTY - Local businesses have been affected on a spectral level since restrictions were implemented in March to mitigate the effects of COVID-19. Some saw an initial hit and began to recover throughout the summer tourist season while many others continue to struggle with coronavirus' ongoing financial impact.

In an effort to capture the perceptions of tourism-related business owners and managers through the pandemic, the University of Montana's Institute for Tourism and Recreation Research conducted a statewide study in July. The survey received 243 responses in total, 18 of which came from Missoula County.

The results included around 205 businesses saying that they agreed or strongly agreed with the following statement: "I'm worried about how long this economic recovery will take." Overall because of COVID-19, around 130 business owners said they were forced to modify their cancellation policies, 124 had to shorten their summer season and around 92 had to reduce their inventory.

Racene Friede is the President CEO of Glacier Country Tourism which funded eight visitor information centers in Montana over the summer. She said they do not represent visitor centers across the board, but they do act as a sample. Overall, the number of people who stopped at their centers was down 66% from the previous year.

In Seeley Lake, the number of visitors that stopped in at the Seeley Lake Historical Museum and Visitor's Center was down 70% from July 2019 through June 2020 (see chart). Numbers were not available for July - October 2020.

Though COVID restrictions did not hit until March, one explanation for the downturn could have been the transferring of the Visitors Center from the Museum to the Seeley Lake Community Foundation building on Sept. 5, 2018 to May 28, 2020. Friede said location makes a difference.

In an interview about the Visitors Center relocation in 2018, Chamber of Commerce Executive Director Lisa Hayhurst said decreased in-person visitation can also be attributed to the Chamber's new website, travel app and just general advances in social media and technology.

While the Visitor's Center did not report a large number of summer visitors, the Seeley Lake and Swan Lake District Rangers reported very high visitor use at developed sites and throughout the Forests. Seeley Lake District Ranger Quinn Carver said campgrounds were filled by Tuesday or Wednesday when they are typically filled by Friday, and every pull-off and flat spot was occupied with campers.

Rovero's Manager Kyle Marx said the hardware store and gas station suffered during the initial weeks of regulation, however as the summer continued they began to see a rebound.

"When [COVID] first hit and the stay-at-home order went into effect, we probably had three weeks of really down sales where things really slowed down," Marx said. "After that, things started picking up. We got a lot more traffic and actually it was probably one of the biggest summers that we've had even though we were sitting at roughly 65 percent of what we ordered."

Acquiring and maintaining inventory was a struggle for the business.

"Getting product was extremely difficult especially when it comes to cleaners, masks, anything to do with sanitation for COVID," he said. "And then it started trickling over into some more odd items that basically we just haven't been able to get almost since the beginning of it. Everyone else has problems getting canning goods."

Bill Baier, owner of the Seeley Lake 1-Stop Convenience Store, said inventory was and continues to be an issue for the store as well, especially for food and sanitation items. If a factory has two or three cases of COVID, then it shuts down making it impossible to get certain items for a period of time. He also struggled with finding help since most of his employees are part-time.

Despite shortages in certain departments, 1-Stop has not had to drastically alter its operations. Another big challenge the store faced was confronting patrons over wearing masks which Condon's Mission Mountains Mercantile owners also experienced.

Grace Siloti co-owns the grocery store with Len Kobylenski. The Mercantile is located within a few miles of the boundary between Missoula and Lake County with Flathead County further north. She said Missoula County has more mask regulations than the other counties.

"People coming from the north were very upset, yelled at us, called us horrible names," Siloti said. "[They felt] like their Constitutional rights were being taken away and instead of realizing that we're just a business just trying to stay in business doing what we have to do, they took it out on the employees to where [they] would cry. So therefore we had to be pretty direct with a sign outside saying, 'Either wear a mask or don't come in.' No niceness about it anymore because it got very bad."

The store offers to select products for the customer and will deliver their purchases to them, however they are not allowed to let people inside the store without wearing a mask. The Mercantile even hired two more employees just to turn away patrons who refused to wear a mask. If they allowed customers to shop without a mask, then others would take pictures and report them to the Missoula City-County Health Department.

"I mean we just couldn't win," she said.

Siloti said she hoped that it would improve as the pandemic progressed but just recently employees experienced a man antagonizing them. She reminds hostile patrons that larger chains like Costco and Walmart are employing similar mask restrictions as well.

"People should not beat up on the small business owner," she said. "We are so tired and so stressed and if they only knew the things that we have to deal with."

On top of the confrontations, from Siloti's perspective, it was a historical high for Condon tourism making it difficult for some residents to buy their food.

"It was very crazy actually," she said. "It was a pretty stressful summer. Our parking lot was always overflowing. A lot of the locals would come down, turn around and leave."

Siloti said inventory was an issue in the beginning of the pandemic, near late-winter, early spring, but to help maintain product supply, they rationed products and limited quantities to avoid hoarding. Shortages of products she saw included aluminum for beverage cans, paper products, cleaning goods, ziploc baggies and rice.

"I was so glad I listened to my intuition ahead of time and I was always a step ahead of it just because I had this gut feeling every time something turned I ordered ahead," Siloti said. "Because I do the ordering, I could see things weren't coming in and they weren't available."

Once COVID-19 restrictions pass, Siloti said they intend to maintain some of the cleaning protocols they had to adopt whenever flu season comes around.

"Frankly if they said COVID went away tomorrow, it wouldn't be as demanding but I would still want to do it through the flu season because I think it's really done well," she said. "It's good to keep up on the shopping carts and the baskets people carry and the door handle that everybody touches coming in and out."

"I think that anytime that you have something affect you on the scale that the coronavirus pandemic has, it brings to light the fact that those protocols, even though they may not be necessary, they're not bad policies," she said. "We never know when something like this could happen again."

Sokoloski said the hardest part about adapting to the pandemic was processing the incoming cluster of cancellations which resulted after they changed their cancellation notice policy from 30 days to seven. This allowed renters to feel out the situation closer to their reservation and decide whether or not they felt comfortable going forward.

Seeley-Swan Vacations had a higher volume of cancellations than usual, but the number of bookings roughly doubled this year. This resulted in the usual reservation total, but with a lot more processing involved. Once COVID-19 restrictions ease, Sokoloski said they would eventually revert to their former cancellation notice deadline.

Fred Valiton co-owns Blackfoot Commercial Company in Ovando with his wife Leigh Ann. He said they were not detrimentally affected by the pandemic, but they did have to alter their expenses.

"It definitely hurt us, not to the point of being financially stressed, we just rearranged what we're going to do," he said. "We're not going to spend a lot of money doing things we might have otherwise."

He said as far as tourism, March was not affected but traffic began dropping off in April. He said in the last half of May and most of June, the tourist business "just quit." Most of June, their hotel was empty and between July and September, he estimated that they reached 60-75% of their usual tourist traffic.

He estimated that they did better than normal on gasoline sales but only by a small percentage.

"People are still traveling," Valiton said. "They still need to buy gas. They don't come in as much, they don't spend the night. I have a very good local following. My locals keep me alive."

He said mask wearing has been an issue because he is susceptible to the harsher effects of COVID-19 and if staff members become sick, then residents would not have immediate access to essential goods.

"I cannot afford to get sick cause we're running this thing as a family operation," he said. "And if I had to close this thing down for two or three days even, to completely sterilize and disinfect it, and there's only a staff of three or four here, they're all out of work. And then people are not going to be able to get stuff here."

As COVID-19 continues to be present in Missoula County, businesses will need to adapt to shifting regulations so they can remain in business and continue to serve their communities. The Missoula City-County Board of Health will adopt or revise an October Health Officer Order at their meeting at 12:30 p.m. Thursday, Nov. 19.