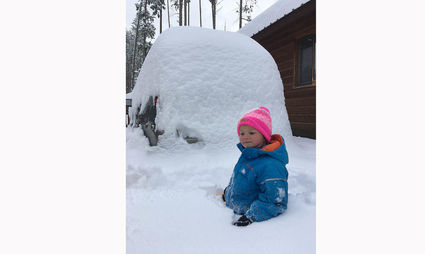 While most adult spent Saturday digging out vehicles and plowing driveways, the younger generation had a blast playing in the snow. Many took the opportunity to do some early season sledding. Pictured four-year-old Olivia playing in front of a buried Subaru.

According to Seeley Lake Ranger District, the snow depth measured at the District was 11 inches over the weekend. Since the District started keeping records in 1967, the most snow recorded for October was 7 inches in 1975. Various Seeley-Swan Valley residents reported receiving 12-18 inches.

The National Weather Services reported Potomac as being the coldest spot in the lower 48 states on Sunday, Oct. 25 at -29 degrees Fahrenheit, breaking the record for the coldest temperature e...