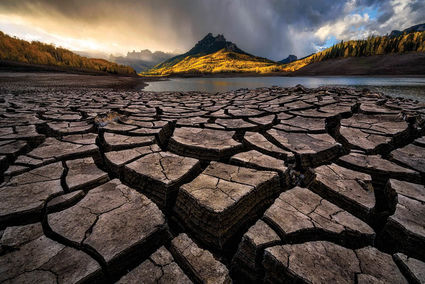 Zack Clothier's Highly Commended image "Ends of the Earth" was selected in the top four in the Earth's Environments category in The Natural History Museum's Wildlife Photographer of the Year competition. It was taken with a Nikon D750 camera and the Nikkor 14-24mm f2.8 lens in October 2018.

Rising before sunrise, professional photographer Zack Clothier and his wife Cortney hiked into a small lake. They day after their wedding, Clothier promised his wife that this would not be a photography trip.

When they arrived at the lake, it was only filled to half capacity. Colorado had experienced extreme drought that year in 2018. Clothier sought out the right composition before the sun rose on this October morning. Focused on the cracked foreground that was typically at the bottom of the lake, he captured a small rain shower in the distance while the sun rose highlighting the mountains dotted with fall colors.

"They probably hadn't experienced measurable rain since April," said Clothier. "I think it told a story of what Colorado was going through. I love fall images and I think everything came together for that image. It was just very good at telling the story."

Clothier's image that he entitled "Ends of the Earth" was among the 100 Highly Commended images that were selected from nearly 50,000 images submitted in the Natural History Museum's prestigious Wildlife Photographer of the Year competition this year. This competition has been acclaimed as the largest wildlife photography competition in the world showcasing the world's most incredible nature photography from photographers around the globe.

Clothier's image is included in the exhibit at the Natural History Museum and in the traveling exhibit. Clothier will also receive a published book of the highly commended images.

"I'm really proud of that image and I'm really grateful for making it that far in the competition. I never thought I would actually be selected to go on in the competition and be on display in the National History Museum. Just the recognition from it means the world."

As a child, Clothier loved tracking wildlife. He took workshops and classes at a local wilderness school where he learned wilderness survival, animal tracking and primitive skills. This further entrenched his love of nature and being outdoors.

As his love for wildlife grew, he started taking plaster casts of the animal tracks and measurements to help him identify specific animals.

"I loved nature, I loved being outdoors. That was just something I latched onto," said Clothier. "I wanted more than just the plaster casts and the journals so I started taking pictures also to go along with that."

He started with a point and shoot camera at age 13 and evolved into film SLR cameras. He also built 35mm film trail cameras. Being completely self taught, he read a lot of books and learning on film cameras gave him experience with exposure, composition and light.

Clothier switched to shooting digital photography in 2007-2008. He turned his passion for nature and photography into a career in 2012 when he started as a freelance photographer and opened Zack Clothier Photography.

Clothier calls himself a nature photographer who specializes in landscapes and wildlife. He does a lot of backpacking to capture the wilderness areas and other areas that are not well known or well photographed. He does spend quite a bit of time in the Seeley-Swan Valley and north to Glacier National Park.

"I'm very connected to nature and it is really my passion. I spend enormous amounts of time in the field trying to capture these images," said Clothier who travels often to vary his portfolio. "I have a lot of patience."

He offers his prints for sale, has a published book "Glacier A Photographic Journey", leads workshops and photography tours teaching in destination locations, has worked with the Montana Office of Tourism and National Geographic. He is a freelance photographer shooting for calendar companies, books, magazines and licenses a lot of his images all over the world.

In the last couple of years, Clothier has started building trail cameras that use DSLR professional cameras. He targets specific animals when he sets the camera traps. He has captured some very rare images in the Seeley-Swan Valleys including lynx and grizzly bears.

"That is my new learning curve," said Clothier. "That has been fun learning how to judge exposure when you are not at the camera and can't see what is in front of you."

Clothier continued, "I love being able to share my gift as a photographer and the things I see and experience in nature with a broader audience either because they don't have the chance or the opportunity to go see it."

While Clothier said he rarely submits his images to photography contests, his panoramic fall scene of a moose at the edge of a lake in Many Glacier Valley Glacier National Park was "Highly Honored" in the 2017 Windland Smith Rice Awards Nature's Best Photography Awards. His image was displayed in the Smithsonian.

"It was more of a landscape image but had that moose as a wildlife presence that went over really well," said Clothier.

A Montana Office of Tourism campaign featured one of his panoramic images of Lamar Valley in Yellowstone National Park with a bison on the side of a road. It was printed on billboards in Seattle, Chicago and Minneapolis and on several other public settings as well as published in National Geographic.

A friend of Clothier encouraged him to submit to the Wildlife Photographer of the Year competition after winning an award last year. Photographers could submit up to 20 images. Clothier said six or seven of his images made it to the final round.

Clothier was told that "Ends of the Earth" image made it into the top four images of the "Earth's Environment" category. He and his wife had planned to travel to London for the awards ceremony but due to COVID it was broadcast online.

During the awards ceremony, presenter Chris Packham described the images in the Earth's Environment category, "These are photographs that typically make you think 'I wish I had been there.' I wished I'd been standing where that photographer was standing with my camera and my lens."

"I couldn't believe it," said Clothier after learning that his image was selected. "It was one of my favorite images that I shot in 2018."

Luciano Gaudenzio of Italy was selected as the winner of the Earth's Environment category with his image of Mount Etna entitled, "Etna's River of Fire."

"I'm just thrilled and honored to have made it into the competition and be recognized," said Clothier. "I've put in a lot of hard work to get to where I am. It feels good that it has been recognized."

One of the questions asked of a featured photographer during the awards ceremony was how much of his photography was luck. When asked this same question, Clothier acknowledged that sometimes it is luck. However, the majority of the time he "makes his own luck" by spending time in the field, putting in the hours and the hard work it takes to get that shot. 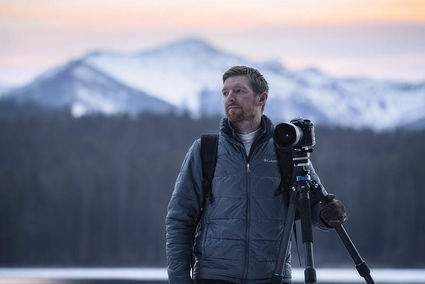 Zack Clothier is a landscape and wildlife photographer. He has been based in the Seeley-Swan valley for the past three years. His strong passion for nature combined with a keen eye for composition allows him to capture the beauty he finds in nature and share his passion with others.

"To be there, you have to be there. The light has to be right, the wildlife has got to come through or the light has got to come through on the landscape," said Clothier. "I put myself out there, in the right places, at the right times. There are some times I get lucky, but most of the time I'm very specific on where I go and what I'm looking for. I just spend a lot of time hoping to get the shot I'm after."

While Clothier hopes the exposure from the award will help boost his photography business, his mission is must less tangible.

"I want to raise awareness to protect these natural places and the wildlife that lives in them," said Clothier. "There are these wild places out there. We need to do everything we can to protect them so future generations can enjoy them just as we can."

To view more of Clothier's images, visit his website https://www.zackclothierphotography.com/ and follow @ZackClothierPhotography on Instagram and on Facebook. His work can also be found at various exhibits and farmers markets and some of his photographs are for sale at the Grizzly Claw Trading Company.

Find the entire Wildlife Photographer of the Year Awards 2020 on YouTube.