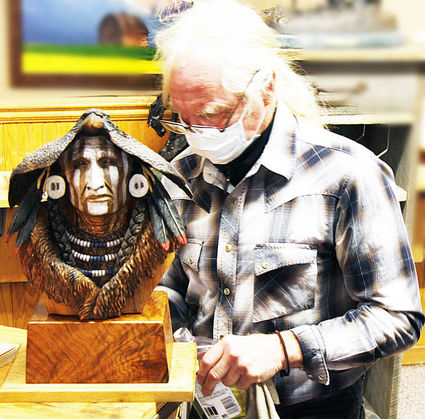 Will Kats applies a coat of oil to the Native American bust he carved. Each detail Kats included in the carving has an authentic historical basis.

SEELEY LAKE – Two women from Hamilton, Montana, artists in their own right, came to Alpine Artisans' Tour of the Arts Saturday October 10.

"Oh my gosh! Oh my gosh!" Barbara Liss exclaimed as she saw Will Kats' display of his woodcarvings at the Grizzly Claw Trading Co.

"The detail is just amazing!" her companion said. "This is awesome!" she added as she moved to look at the bust – carved head, shoulders, and upper chest – of a Native American subject in full regalia.

"I think they're just stunning!" Liss replied, examining a trio of Indian women.

Kats talked to them about the wood. Though he works with a variety of different woods, juniper is one of his favorites. He said he collects the beautiful indigenous wood on the high mountain slopes. The small tree itself is unimpressive, but after being carved and oiled, the cream and red colors show more prominently. He talked about the pieces he carved out of the dark, wine-colored juniper from North Dakota, a gatepost given to him by a third-generation rancher who had to sell his ranch.

"To me, the heart of it is your appreciation for wood," Kats said. "My ability as an artist is almost secondary to that." He adds, "What I try to do is keep the grain as natural as possible. I want you to be enraptured with the grain. Once you start dying it, staining it, painting it, you lose all that."

Kats said he was a carpenter all his life so he always had a hammer and chisel around. It seemed natural for him to experiment with carving. Primarily self-taught, though he has read extensively about the art, Kat's said the key is to just keep doing it.

Always critical of his own work, Kats said he usually feels only about 90 percent satisfied with a finished piece. Very few pieces reach 100 percent on his approval scale.

Kats said, "You always feel that there's something you could have improved upon. I guess that's in the whole attempt to try to become better at it"

Woodcarving is a subtractive art, Kats explained. With bronze pieces, the artist can always remove or add clay to correct imperfections before the final casting. A woodcarver can no longer make corrections once wood has been removed.

Kats has no fancy studio to work in. His work area is just a roof over a wood stove, a place to stay warm when carving in the winter.

"That's one thing nice about having a wood stove in your studio," he said. "Everything you carve away, you throw in the stove to keep warm. And if you get to a certain point and look at it and say I've made too many mistakes already; it goes in the stove as well."

Kats said, "On the final end of things, you're taking wood away about 1/64th at a time. Sometimes even sanding it, you take off more than you want to. You start out with great big U-shaped gouges, then you go down to where you're just using little bitty pinpoint micro chisels. I use rotary tools to do finish work, fine hairs on the end and stuff like that."

Some of his more involved pieces and life-size busts take about 120-130 hours to complete.

Rather than portraying a generic Indian, Kats strives to be as authentic as possible in his Native American carvings. He owns a Smithsonian reference book with pictures of 1800 war shirts. He shows Tour of the Arts visitors his work-in-progress and points out where he is going to add porcupine quill beadwork on the shirt of the spear-holding subject. He has reference books detailing Crow and Nez Perce hair arrangements. He can point to a specific reason for every detail on his Native American pieces.

Other subjects include bears and moose and wildlife he sees on his frequent trips into the Bob Marshall to collect wood and ideas. But Kats also realizes the need to diversify. 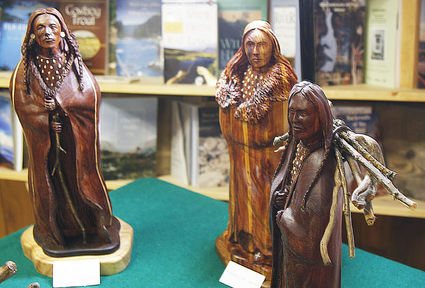 The two darker pieces depicting Native American women were carved from an old ranch juniper gatepost from North Dakota. The middle woman is carved from the more cream-colored Montana juniper. Kats carved the simulated ivory ornaments on the dresses from deer antlers and inset them into the wood. The wood bundle on the one woman's back came from a high mountain slope in the Bob Marshall where the tiny finger roots of the juniper are dry and brittle from exposure to sun and wind. Some of the roots still had lichen on them, which he oiled and sealed in.

For one thing, Kat's said, "...not everybody has a penchant for Native Americans and mountain men. So [prospective customers] might love your work or whatever, but the ability to sell is limited unless you increase your scope and subject matter. So I tried to do stuff like interpretive sculpture that makes people think when they look at it."

He points to a dark walnut piece named Meditation and to a hammer with its head curling back to pound a nail into its own handle.

"And when you do things like that," he said, "It puts a demand on how you work. If you diversify, you're also going to learn how to carve better."

Kats tries not to focus on the monetary side of his craft. Though he confesses there have only been a few years when his woodworking sufficed as a sole source of income, he tries to concentrate on the fact that the true payment is in the doing of it, not in the selling. The Grizzly Claw Trading Co. carries his pieces on consignment and he participates in a few major art shows each year, all of which were closed this year because of COVID.

Choosing a wider point of view, Kats says, "I'm bellyaching, but some people, that's all they do for a living. They go to a show every week somewhere around the west. And to have it all be closed... I can't imagine what all those people are doing for income."

Kats said he was surprised at the amazing turnout for Tour of the Arts. Five or six of his pieces sold in the first half hour.