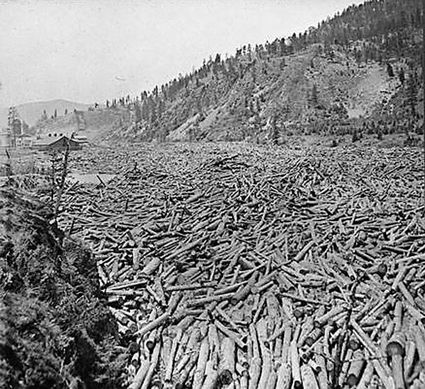 A view of the great log jam on the Blackfoot River after the flood of June 7, 1908. Image entitled ""Log jam looking south from center"" from the series ""Missoula Through the Stereoscope."" The buildings in the background are possibly part of the mill near Bonner.

If the early history of Seeley Lake is intertwined with the lumber industry, the rise of the United States Forest Service is incontrovertibly intertwined with Seeley Lake and in particular with the Big Blackfoot Timber Sale of 1907-1910. Historian and member of the Camp Paxson Preservation Board Gary Williams has been researching that sale. The Seeley Swan Pathfinder will be bringing some of the interesting bits of information he has discovered about logging in the Seeley Lake area and also about the fledgling U.S. Forest Service.

SEELEY LAKE – The last several articles in this Timber Sale series focused on the complaint by the Big Blackfoot Milling Company that they were being treated unfairly by the Forest Service. In June, Associate Forester Overton Price sent a letter disputing the complaint and explaining in detail the milling company's transgressions against the timber sale contract. It was almost seven weeks before the mill's General Manager Kenneth Ross wrote a reply, excusing the tardiness of his letter by citing a "long siege of high water."

The phrase was a major understatement. The "high water" was later known as the Great Flood of 1908. It knocked down bridges, flooded streets, stranded railroad travelers, incapacitated telephone, telegraph and electrical lines and threatened to wipe out the city of Missoula.

A week after the waters subsided, the June 15 issue of the Missoulian carried an article with the header, "History of the Greatest Disaster That Missoula Has Yet Suffered: A Careful Resume of the Daily Incidents of the Reign of Terror Through Which the Garden City Has Just Passed and an Estimate of the Destruction." The article said, "For five days the city was in a state of terror and anxiety that has never before been approached.... catastrophe and misfortune succeeded misfortune."

The winter of 1907-08 had been relatively mild, with less snow than usual on the mountains. With little rain in April, the prediction was for a low-water summer. At the Seeley Lake timber site, when spring ice melt opened the lakes, the work of sawing, trimming, transporting and piling felled trees was replaced by the chore of driving the timber downriver.

The piled logs were released into the lakes where lumbermen termed "river pigs" guided them using a peavey, a pole 30-50 inches long tipped with a metal spear with a hook slightly above it. Working either in the water, from flat-bottom boats or nimbly walking across the rolling logs, the river pigs forced the timber to the lake's outlet.

Logs from Seeley and Placid Lakes had to be transported through the Clearwater stream to Salmon Lake, from there to the Blackfoot River and finally to the Big Blackfoot Milling Company in Bonner. To facilitate passage through the narrow streams connecting the lakes, the company created temporary lumber dams. Once the lake was filled with logs, dynamite blasts demolished the splash dams, flooding the stream area and rocketing logs and water toward Salmon Lake.

The process of moving the bobbing timber toward the lake's outlet was repeated. But according to the author of "The Baron, The Logger, The Miner and Me" John H. Toole, Salmon Lake proved more obstinate.

Toole wrote, "The river pigs could do little here because the lake was 100 feet deep with an abrupt drop off. An effort was made to punch and pole the logs from the boats, but every day the wind blew up the lake and the logs floated back to the lake's north end."

Winching required creating a boom of floating logs chained to one another. One end of the log chain was tied to a stalwart tree on the west side of the lake. The boom partially encircled the floating timber, its other end connected to a cable attached to a giant hand-held winch in a bateau positioned at the lake's south end.

Toole reports, "Rotating the drum winch drew the logs down the lake, but it was so tiring that relays of men had to take turns on the handles."

According to Toole, two more splash dams had to be built and the water allowed to build up behind them before the logs made it to the confluence of the Clearwater and Big Blackfoot Rivers. Once on the swiftly moving Blackfoot, the drive became easier.

Toole wrote, "The flood of 1908 helped greatly in getting the logs to Bonner, but it caused a huge strain on the dam."

Rain began falling on May 7 and continued for a week, soaking the soil. There followed a few days of sunny cloudless weather, then the rains returned in earnest and continued for the next three weeks virtually without letup.

On June 5, the northern section of the Higgins Avenue bridge succumbed to the intense pressures of the raging Clark Fork River and the debris it carried along, including a toll bridge floating down from Hellgate Canyon. Two days later the southern section of the Higgins Avenue bridge collapsed, leaving only the middle span upright but unable to link either side of Missoula with the other. The river finally crested at a record high of 17.5 feet.

The millions of logs driven toward the Bonner mill from the Seeley Lake site only intensified the problem. Toole wrote, "The logs all arrived at once, and an enormous pile choked the mouth of the Blackfoot Canyon. Logs blocked the county road, floated around the [mill] office and into the yards."

There was enormous anxiety concerning two dams upstream of Missoula. One on the Big Blackfoot River, called the old dam, held back the logs from the Seeley Lake drive. The other was the newly constructed Milltown Powerhouse and Dam, built by William Clark and dubbed Clark's dam. It held back the full rage of the Clark Fork River, although the powerhouse filled with 10 feet of water and an estimated 48,000 cubic feet of water gushed over the dam's spillway, according to the Bonner Milltown History Center and Museum.

The 1908 Missoulian article reported the old dam was dynamited to lower the backwater and prevent the logs in the mill pond from rising over the booms and piers that held them in check.

As for the new Clark dam, in a May 11, 2018 KPAX retrospective report by Jill Valley, Bob Brown, former director of the Historical Museum at Fort Missoula said, "They seriously thought the dam would go and if the dam had gone, all of Missoula at that point would have been underwater. I mean, forget it! It would have been wiped away."

If the citizenry was alarmed, William Clark's spokesman professed complete confidence in the dam's integrity: "There is no more danger of the power dam going out than there is of the mountains washing down into the river." 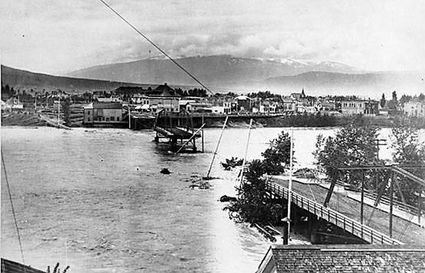 Higgins Avenue bridge in Missoula, Montana after the 1908 flood. Large portions of the bridge have been washed away. Photograph is taken from the south side of the river.

The dam did hold. But literature on the Bonner Milltown History Center and Museum website reads, "...he proved quite wrong on the second assertion. Mountains along the Continental Divide, crushed and stripped of precious metals, did wash into the river as mine waste, strewing contamination from the headwaters of Silver Bow Creek on down the Clark Fork."

The website further adds, "The great flood left more than 6.6 million cubic yards of waste, laden with heavy metals and arsenic, in the sediment behind the dam. These toxic sediments poisoned the aquifer that was used by Milltown residents for generations before its designation as a Superfund site in 1983."

Having taken a closer look behind Ross's "long siege of high water," the next article in the Timber Sale series will report on the substance of his reply letter in which he states, "...we certainly cannot agree with you in your assuming that we have been treated fairly..."