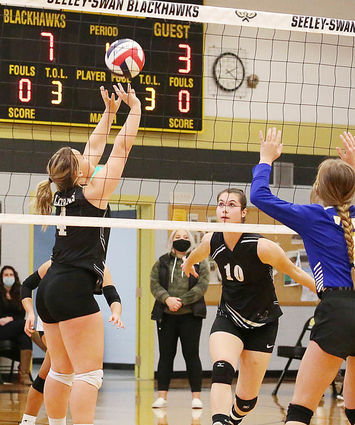 Senior Jordan Johnson sets the ball for Klaire Kovatch. She had 16 assists in the match.

The Lady Blackhawks took game one with ease, 25-11, but had a little more trouble with the Pirates in game two. They led the whole game up until the end when the Pirates gave them a little scare, taking the lead 23-24. The Pirates' luck ran out however and the Lady Blackhawks defeated them 26-24. The third and final game was another blowout, 25-5.

Lady Blackhawk Sariah Maughan said the team is really starting to come together.

"We did a really good job today," said Maughan. "Everyo...