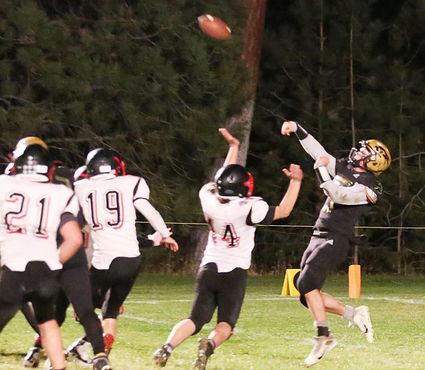 Junior Walker McDonald sends off a nearly 60 yards down field to Sawyer Shelmerdine for the Blackhawks' first touchdown.

SEELEY LAKE – The Seeley-Swan Blackhawks hosted the Darby Tigers for their homecoming Oct. 9.

The Blackhawks offense got off to a rough start after the Tiger's kickoff. They bobbled the first snap of the game, giving the Tigers the ball on the Blackhawks' 23-yard line.

The Blackhawks defense held the Tigers to just a couple yards in four plays giving the offense a second chance. Another wild snap nearly gave the Tigers a safety. The Blackhawks cleaned it up and that would be the closest the Tigers would get to putting points on the board until the closing minutes of the half.

With a minute and a half on the clock, Owen Hoag snagged another one of his signature one-handed interceptions giving the Blackhawks one more shot to score. The Tigers were not going to give it up that easy and pushed the Blackhawks all the way back to their 1-yard line. The game was looking like it would go scoreless into the second half.

Undeterred, the Blackhawks fought their way out to the 13-yard line and with 37 seconds on the clock, Walker McDonald connected with Sawyer Shelmerdine for a long pass. Shelmerdine pulled the ball down at the Tigers' 20-yard line, shook free from his defender and ran in for a touchdown. McDonald ran in the conversion to put the Blackhawks up 8-0.

The teams battled back and fourth in the third quarter until the Tigers managed to score a touchdown and conversion to tie the game up 8-8 with one minute to go in the third.

The Blackhawks answered right back with a 65-yard touchdown run by Eric Lorentz putting them back on top, 14-8. The Tiger's foiled the two-point conversion. 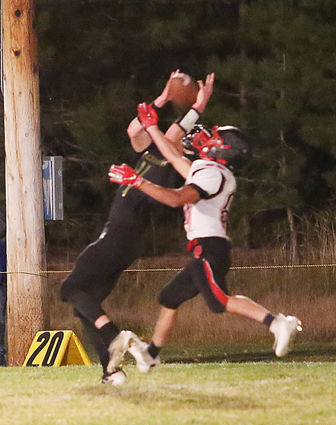 Junior Sawyer Shelmerdine catches a long bomb from Walker McDonald. He took the ball in for a 67-yard touchdown.

Neither team scored in the fourth quarter and the Blackhawks came away with their second win of the season.

McDonald completed 5 of 9 passes for 92 yards including connecting with Shelmerdine twice for 74 yards, Ben Haley two times and Klayton Kovatch once for 18 yards.

On the ground, Lorentz's 65-yard touchdown put him on top of the rushing yards with 101 total in 12 carries while McDonald had 44 yards on 9 carries.

Kaden Thornsberry led the Blackhawks in total tackles with 5 solos and 7 assisted tackles while Lorentz led with 7 solo tackles. McDonald and Garret Saalfeld each had 3 sacks and Hunter Carpenter had 2 sacks.

Colby Gonzalez and Hoag caught one interception each.

The Blackhawks will host Arlee Oct. 16 with kickoff at 7 p.m. Check the Seeley-Swan High School Activities Facebook page for updates.