Thompson opens his studio during Tour of Arts this weekend 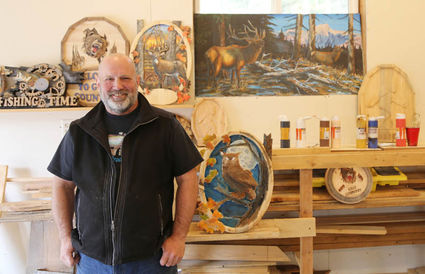 Scott Thompson is one of several artists who will be featured in Alpine Artisans' Tour of the Arts. He works both in wood carving and acrylic painting.

SEELEY LAKE - Scott Thompson is a woodcarver and acrylic painter who is one of several participating artists in Alpine Artisans' upcoming Tour of the Arts.

Thompson is originally from Butte, but he moved to Willow, Alaska in 1990 where he currently lives. He bought property in Seeley Lake two years ago and now plans to spend three to four months out of the year in the area.

He chose to move to Seeley Lake because his family would frequently drive through the town on their way to Kalispell. In addition, he discovered that some of his extended family bought property in the town so he also pur...