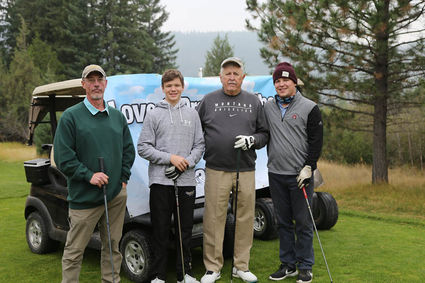 SEELEY LAKE - Local golfers came together over the weekend and raised more than $5,000 for Seeley-Swan Blackhawks Athletics as well as honored the life and legacy of Mike Haley at the first annual Mike Haley Memorial Golf Tournament.

The tournament took place Saturday afternoon at Double Arrow Golf Course. It was organized by Mike's son Jacob Haley. Mike was killed in a vehicle accident May 5, 2019.

Jacob said the tournament acts as a way to memorialize his father as well as the plane accident that recently killed Charles Wolff and Wayne Cahoon as well as injured Christian Cahoon.

"[The tournament helps put] a light on [my dad's] name," Jacob said. "We miss him a whole bunch."

Jacob continued about the plane crash, "Our hearts and thoughts and prayers go out to the Cahoon family. And Christian, he's doing a great job recovering. [The Cahoons] are warriors for even being out here and contributing to part of this."

Jacob chose to organize a golf tournament due to his lifelong passion for the sport as well its social distancing benefits. He said while his father was not a golfer himself, he was always supportive of the various local sports programs. He estimated around 140 people participated in the event.

During his opening speech, Double Arrow Golf Pro Nathan Miller congratulated Jacob and the rest of the Haley family on organizing the tournament.

"Golf tournaments don't happen overnight, but Jacob and his family have pulled this thing together, pretty much on their own," Miller said.

He was pleased with how the tournament unfolded.

"Outside of (the rainy weather), what a great day," Miller said. "I mean for a great cause, for a couple great causes really, I was glad to be a part of it." 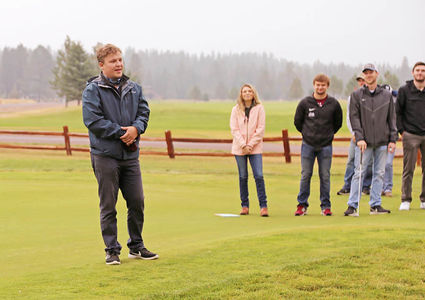 Following the tournament, there was an award ceremony, raffle drawings and  a live auction with all proceeds going back to the high school. Marty Palmer, Dustin Gordon, Ty Pod and John Thorn took first place in the tournament. In second were Paxson Swartz, Morgan Schenk, Seth Kitchin and Lucas Kalanich. Nevin Sather, Callie Sather, Lisa Riggin and Shelly Riggin came in third.

Seeley-Swan High School Principal Kellen Palmer said while they do not know specifically where the money will go as of now, it will be put into the general athletic fund and be used to make up for revenue lost as a result of the pandemic.

"I'd like to start by thanking Jacob Haley and Nate Miller for putting on the tournament," Palmer said. "It was great to be able to remember some great members of our community while raising money for SSHS athletics."