Tuning our senses to the unintended consequences of face coverings 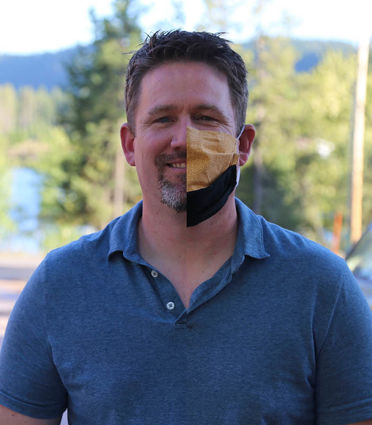 Seeley Lake resident and Swan Valley School teacher Chris Mauldin with and without a mask. Face coverings not only limit spread of disease, they also cover more than half of someone's face, the focal point of conversation, muffling the sound and diminishing non-verbal communication cues people rely on to communicate effectively.

SEELEY LAKE – While swimming with his family this summer, someone came over to introduce themselves to Seeley Lake resident Chris Mauldin. Without thinking about social distancing, Mauldin, who is deaf when not wearing hearing aids, leaned in and asked the person to speak directly into his ear. He later recognized that his default way to communicate is no longer acceptable.

The social norms that allowed for close proximity and being able to engage in public without a face covering are currently being rethought and regulated due to the coronavirus pandemic. While there is a lot of discussion and controversy surrounding masks and social distancing requirements, some of the less-talked about effects include inhibiting people's ability to hear, limiting non-verbal cues and creating new barriers to communication. These unintended consequences are heightened for those who already experience hearing loss.

"It is a new awareness of my hearing impairment," said Mauldin. "I've adjusted and accommodated and learned how to function well in a society that hears better than I do. Now there has been this jarring removal of one of the key tools [lip reading and visual cues] that I have for having a normal conversation. There is a reluctance for me to engage socially because I know it is going to be an impaired conversation."

The National Institute on Deafness and Other Communication Disorders (NIDCD) reports out of every 1,000 children in the United States, between two and three are born with detectable hearing loss in one or both ears. Of these children that are hearing impaired, 90% of them are born to hearing parents.

Roughly 37.5 million Americans, 15% of the population age 18 and older, have reported some degree of hearing loss. The NIDCD has also estimated approximately 28.8 million people in the United States likely need hearing aids, but that among adults with hearing loss between the ages of 20 and 69, only 16% have them.

The ability to hear allows people to communicate, interact with others and complete important tasks especially at work or school. It is one of the five senses that helps connect people to the outside world and others. When this sense is impaired or removed, people rely more heavily on their other senses sight, smell and touch to communicate.

Hearing loss, or hearing impairment, is typically defined as having a limited or total inability to hear sounds measured in decibels. Someone unable to hear sounds under 25 decibels, the volume of normal conversation, is considered to have mild hearing loss. On the other end of the spectrum, the Social Security Administration may offer disability benefits to someone with profound hearing loss, a hearing sensitivity less than 90 decibels, the level of shouted conversation.

Mauldin was diagnosed with a hearing loss at age two and a half. He has an 80-decibel loss. While low tones are more audible, he can't hear high tones without assistance.

"Even in fifth and sixth grade, it still came down to s's and t's," said Mauldin. "It is those core sounds that facilitates the language."

Mauldin believes that because he went straight into speech therapy, he was able to overcome the tendency to have tonal speech because he didn't have sign language to fall back on. He also relied on his ability to read lips.

"It's just that natural association with certain lip movements and certain sounds," said Mauldin. "We all do it to a certain degree. I think the deaf community relies on it more."

Face coverings introduce a lot of factors that need to be mitigated, especially for the hearing impaired.

First, masks remove the ability to read lips. By covering more than half of someone's face this limits non-verbal communication and visual cues that are important for context and understanding.

While there are transparent masks available that Mauldin thinks may be a good solution, they are not widely available. He also questions their functionality depending on if they fog up, get smeared or turn into something children will stick their tongue against it to be silly.

Face coverings also reduce the volume and muffle the sound coming through it.

Professor Kevin Munro, director of the Manchester Centre for Audiology and Deafness, has done a lot of research on the challenges of face mask use for the hearing impaired. The ENT& Audiology News May 7, 2020 article "Quantifying the scale of speech-communication difficulties while wearing face protection," reported the acoustic attenuation by a three types of face masks – a cloth surgical, fold-flat and pre-formed - and a face shield.

The study reported that the cloth surgical mask produced only a modest attenuation in most of the range of important speech frequencies, with a maximum of about six decibels. The attenuation was doubled with the fold-flat and pre-formed and further reduced by the face shield. All face coverings reduced the frequency region between 1-2kHz, the area most affected by age-related hearing loss.

An attenuation of 8-10 decibels would translate into an equivalent degradation of hearing by one step in the five steps system quantifying the degree of hearing impairment between normal to profound. This creates a disadvantage in communication for someone with 'normal' hearing placing them in the mild hearing loss category.

In a Podcast entitled, "Face mask misery: Do face masks impair speech understanding?" Munro further expanded on the study reported on in ENT News. He said the degree of impact to the speech signal depended on the quality of the mask and how tightly it fit to the wearer's mouth. While the face shield enables clear visibility of the face, it distorts the way words sound by removing some of the high frequencies.

Based on his extensive speech therapy and depending how long masks are required, Mauldin thinks that there could be broad impact on young children who are learning to enunciate and acquiring skills in letter sounds.

Mauldin explained the "s" and "t" sounds, hard consonants, "ch" sounds and the higher frequency sounds are all being clipped by a mask. Those were the sounds he really had to work on because the majority of his hearing loss was in that high range.

In addition to hearing words spoken, children also learn proper lip movement and enunciation while watching adults speak. Mauldin said this learning will be diminished by wearing masks in schools and other public spaces.

Mauldin recommends parents work closely with their child's teacher to do an enunciation assessment since it would be difficult to do while wearing a mask.

"Teachers are more than qualified to help parents understand what kind of games and what kind of things you can do at home to facilitate that because they aren't going to be getting that at the school," said Mauldin who teaches kindergarten, first and second grades at Swan Valley School.

Mauldin continued, "This just legitimates the need to communicate at home, taking time to talk on whatever level, reading together, enunciating words together...the kids are going to need that much more time at home in the "normal" unmasked environment to have exposure to the sound they hear being correct, working through the lip motions and the process of developing proper speech."

Finally, Mauldin feels masks and the social distancing are new barriers to relationship building. Because people communicate most effectively when they are comfortable, all of these new experiences increase the amount of time it takes to become comfortable.

While not specifically addressing relationship building, Munro said that removing visual cues while someone's face is covered can make communication more taxing because of the mental exertion required to listen, especially when there is background noise. As a result, even if a person can follow what is said, they have fewer mental resources left to think about and recall what they heard.

"Whether we like it or not, it creates a hindrance under what would be a normal interaction," said Mauldin. "It creates all that much more room for misinterpretation, misunderstanding and it creates more of that need for patience, empathy and finding clear routes of communication. Everyone needs to be willing to take that extra step to ensure that you are communicating correctly."

Munro recommended during this time of widespread mask use, those that are hard of hearing should:

• Advocate for themselves and ask others to speak slowly and clearly. Increased volume when someone's face is covered doesn't always help.

• Utilize apps that translate speech into text in real time and utilize closed captioning while engaging in virtual meeting spaces. While neither of these are perfect, they help break down barriers.

Mauldin hopes that the hearing community will have a little more patience and understanding while everyone adjusts to the new social norms. A few recommendations from his experience:

• Just because someone is deaf doesn't mean they know sign language.

• Take the extra time to make eye contact before communicating.

• If someone is having a difficult time understanding, use a notepad and write things down.

• Nonverbal greetings and gestures work well when used appropriately within the culture and demographic.

"If anything, create some empathy and grace for people who don't respond in a way that you would normally expect them to respond," said Mauldin. "The first step with empathy is always awareness and looking at something through a different lens and what this experience is like for someone else tempered with an awareness that people don't want to be treated differently for their differences. You have to find that balance."