Hunters and residents reminded to be bear aware and secure attractants 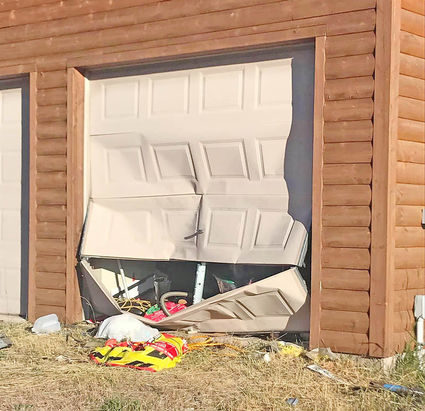 Seeley Lake residents Bruce and Kelli Wold had a black bear destroy their garage door during the night Aug. 15. Kelli said the only thing in the garage that the bear wanted was grass seed. When it tried to come up on the porch, the motion light scared it away.

SEELEY LAKE – With hunting season just around the corner Montana Fish, Wildlife and Parks Bear and Lion Specialist Jamie Jonkel wants to remind hunters and others out recreating to carry bear spray and be aware.

For those living in and around Seeley Lake, he also asks them to secure their garbage and other attractants and stop feeding deer and birds. He estimates there are 50 different black bears and 15-20 grizzly bears around Seeley Lake including two female grizzlies with this year's cubs.

"People need to realize bears are continually moving through the area. Because of the terrain features and the streams, they really have no choice but to come through the middle of town," said Jonkel who equate these behavioral traps to "a kiss of death" for bears. "It would be like me walking from my house to my sister's and all the neighbors had $100 or $1,000 bills hanging from their doorknobs. It would be pretty hard not to stop and help myself."

This year has been a great huckleberry year around Seeley and there are still good huckleberries in the higher elevations. It has also been a bumper crop for serviceberry, chokecherry and hawthorn berries.

"Because of the tremendous berry crop this year, we are just trying to get the word out that if you are living in the Seeley Lake area, Ovando, Lincoln area, or if you are coming here to recreate, don't be buying a new set of ear phones that you can slap in your ears so that you can wander around," said Jonkel. "Be prepared. Whereever there are thick service berries and hawthorn, there are also a lot of bears."

Jonkel said not only are they seeing local bears, but bears from the Missions, Arlee/St. Ignatius and the Swan Front are all coming to the area. If hunting or recreating an in area where berries are plentiful, assume there is a bear within 100 yards.

"The best thing to keep you out of trouble is to be thinking. Just like going down a dark alley in a big city, you should have your senses fully on cue when you are wandering around," said Jonkel.

In addition to carrying bear spray and having it readily accessible, Jonkel recommends paying attention to the surroundings. If someone sees bushes moving, they hear sticks snapping or huffing, leave the area. Making noise will alert a bear to something in the area.

Seeley Lake is in a unique area where terrain features and four major drainages naturally come together that funnels bears and mountain lions through the community. During a good berry year, the bears are attracted to the area for the food source. Bears learn problem behaviors if they get a food reward from an adjacent home site on the edge of town or in dispersed developments like all of the Double Arrow Ranch.

"That is where you start seeing the bears venturing further into town and coming to businesses," said Jonkel. "The people living on the fringes of town can really help out a lot if they keep an exceptionally clean place."

FWP has put down three black bears that Jonkel said were wandering through town, going from garbage to garbage, porch to porch, and stealing food off picnic tables and barbeques. Because of the extreme food conditioning, FWP could not relocate them.

Jonkel said there are multiple other black bears in Seeley Lake that are exhibiting the same behaviors.

"It is like a feeding lot in Seeley, I hate to say, for garbage, bird feeders, chickens, cat food and dog food," said Jonkel. "There is a factory producing bad bear behaviors."

There are also multiple individual and family groups of grizzly bears in the area. FWP is actively trapping for a sub-adult grizzly bear that has been getting into dumpsters that weren't secured properly.

Jonkel said the bear is not collared or tagged. He said if they do catch a grizzly and it is very, very obvious that it is the one they have been pursuing, the chances are high it will have to be euthanized.

"People need to realize that it is not just one grizzly around town," said Jonkel. "It is one grizzly that has learned these behaviors."

Jonkel pointed out that he has been working in Seeley Lake for 25 years and the bear situation has continued to get worse.

Jonkel recommends the public take the time to look at the landscape around their home like a bear or a lion would, taking note of all attractants. Contain all garbage and livestock/pet food in bear-resistant containers. Put up electric fence to secure livestock pens, create an area to hang game and have a safe place to hang bird feeders through the summer.

"If you want to problem solve, feel free to give me a call and we can put our heads together and come up with something that works," said Jonkel.

Jonkel encourages everyone to report grizzly activity and tracks in the area. He also would like to hear about black bears and mountain lions that are exhibiting problem behaviors. This can be reported on the Missoula Bears website (missoulabears.org) and Facebook page or call Jonkel directly at 406-544-1447. For the most current, up-to-date information regarding bear and mountain lion activity in the area visit missoulabears.org.