The Lady Blackhawks scrimmaging Wednesday, Aug. 19. They are all excited to have the opportunity to play.

SEELEY LAKE – As of Aug. 14, Seeley-Swan High School Blackhawk athletics are in full swing. Although all of the teams have had to adapt to distancing, health screenings and uncertainty, the players and coaches are excited to have a season and represent SSHS and the community.

In response to the coronavirus pandemic, county and statewide regulations require all players and coaches wear masks when they show up for practice and they are health screened before practice starts. The teams spread out during drills and conditioning and the equipment is sanitized between practices. For football, the team is split into smaller groups to limit contacts should a positive case be identified.

SSHS is following all the Montana High School Association (MHSA) guidelines. SSHS is working with the Missoula City-County Health Department regarding the number of spectators.

SSHS Principal Kellen Palmer explained that because SSHS is under restrictions placed on them by Missoula County, when teams travel out of county, the restrictions could be different. These decisions are constantly changing and SSHS is working closely with the Health Department.

"We are very excited that we have the opportunity to allow our student athletes to compete again! We would love to allow everyone at every game; however that will not likely be the case," said Palmer. "The biggest thing you can do is adhere to whatever restrictions are put in place.  If we are unable to follow [the Health Department's] restrictions and people act on their own we could be shut down and not allowed to play at all.  We want this for our student athletes so please be respectful of whatever decision is made so the kids can play!"

If fans are allowed, they will be invite-only and there will be no tickets taken or concessions. Athletic Director Shawn Holmes said money earned from tickets and concessions are used for equipment and general purchases for that sport.

"Fall funding will be battle next year so any support we can get will be greatly appreciated," said Holmes.

To donate to the football, volleyball or cross country teams, members of the community are encouraged to contact the teams' head coach or Holmes directly because it has to go through the school funds. Donations to the SSHS Booster Club benefit all sports.

SSHS is purchasing video equipment to broadcast the games for the community. Links will be provided when they are available.

The community is encouraged to follow the Seeley-Swan High School Activities Facebook page for the most current information regarding games, updates and links to videos. The schedules are printed in the Cory's Valley Market ad this week, page 20, and will be updated as needed on the SSHS website, https://www.mcpsmt.org/Page/15 under athletics. This year senior nights will be at the home games Sept. 4 for football and Sept. 5 for volleyball. Homecoming is scheduled for Oct. 10.

SSHS Athletic Director Shawn Holmes is the head coach for cross country this year. He coached cross country 27 years ago in Michigan for two years and has been coaching track for the past 30 years. When the position opened this year, he thought it would be fun to get back into it.

Due to the MHSA regulations, only 28 runners are allowed per race. Due to these restrictions, SSHS has not been invited to the meets with the AA schools, cutting their number of meets in half to four. Holmes is hoping to add a meet in Seeley Lake and participate in a virtual meet hosted out of Big Fork. Their first meet is in Deer Lodge Aug. 29.

Because track was canceled last spring, Holmes said they have been easing into conditioning. The first week they focused on building strength in their core and did some cycling workouts around the lake to slowly work into it. Wednesday, Aug. 19 was their first run.

"We will have a lot of time to get them into running shape and I want to work on other things to make them stronger," said Shawn.

Holmes said Hannah Ayers, the Maughan sisters Sariah and Emily and Kyla Conley are returning. New to the team this year is Ava Thornsberry and Connor Chadwick. Sam Ayers, an eighth grader at Seeley Lake Elementary, has also come out and is practicing with the Blackhawks.

Holmes said everyone is setting personal goals for the season. As a team, he wants to see them improve their times. The end goal would be to win state again this year, however, even though the State Meet is scheduled for Oct. 24 in Kalispell, MHSA has not released any details regarding it.

"We are going to run like there is going to be a state and we are going to try and win it," said Holmes. "I told them I would get fired if we didn't win state like we did last year."

The biggest challenge, Holmes said, will be pushing themselves. Because there will only be 28 runners in each race, depending how the groups are assigned, it is possible that the Blackhawks will not be running in the same race as runners with similar speed.

To combat this, they are doing a lot of pace work, so they can set their own pace.

Holmes said, "We've got to learn how to push ourselves without anyone pushing us."

Jared Crum, Eric Samuli and Jeff Ebert coach this year's Blackhawks. There are 23 players out which is the largest team they have had in three years.

The team met for nine weeks this summer to workout together drawing around 20 or more players each practice. They were working in the weight room until the beginning of July when Missoula County closed all indoor activities at which time they moved outside. They did a lot of dynamic conditioning using old tires and plyometrics, something Head Coach Crum led during spring training for NFL players on the coast.

"I think we made a lot of kids into really agile athletes because of this. We've got kids doing things with their body that they never did last year," said Crum. "I don't know if that coronavirus hadn't come if we would have gone to this type of training. It could be a blessing for us."

Crum feels the players' football aptitude is much further ahead technically as well as physically than they have ever been in previous years. He said they are teaching the players skills that he wouldn't expect to teach them until college.

"I think this year is going to be so exciting," said Crum. "We are still really, really young but we've really got a good bunch of kids and it seems like in the last week we've found our identity."

Sawyer Shelmerdine is the starting quarterback for the Blackhawks this year. Owen Hoag and Cannon Hawkinson will also be playing the position.

Crum said because of COVID, Shelmerdine has taken advantage of a lot of online clinics and trainings. Crum estimates he has put in 20 hours a week just studying the position and learning the offense. He has constructed an obstacle course at his house that could be seen at any NFL training camp.

"I've been doing this for 25 years," said Crum. "He's got to be one of the most dedicated kids I've seen putting in the work."

The mantra for the Blackhawks this year is commitment – commitment to themselves, their school, their team and their community.

"The accountability and commitment level this year is unparalleled [compared to the past three years]," said Crum. "Every practice they show up and go 100%."

Crum said the conference looks a lot different this year because many of the top schools in the conference graduated some of their best players. As a team the Blackhawks' goals are to make the playoffs, win their conference and take state.

"We have the talent to get that far this year," said Crum. "There is not one trophy in the case for football and we are trying to change that."

Crum said they will continue to foster the relationship with the football players at Seeley Lake Elementary so when they graduate and become a freshman, they want to come out for the football team and become a Blackhawk.

"This is the fuel for a lot of these kids to show up to class and really dig in. If we can just give them some kind of hope. It isn't so much for the wins and the losses, it just keeps these kids active. That is what we all want in the long run."

"This team represents the town and they are proud to do it. They want to bring a championship home. The fans are what fuels us and I hate not having a loaded house," said Crum. "We miss our fans but we are going to represent the town and we hope to bring them some glory this year."

Fans are encouraged to follow the Seeley-Swan Blackhawks Football Facebook page. After the season kicks off Sept. 4 at home against Victor, the coaches will post team and individual player updates throughout the season.

Shelby Holmes stepped into the head coach position for the Lady Blackhawks this year with Assistant Coach Alyssa Harris. With around 18 players out for the team, Holmes expects to seat eight to 10 players on varsity. They are looking to build on the foundational skills, taking everything day by day with the end goal of making it to state.

"In volleyball, every skill is very unique from each other. You go from hitting a ball where you are jumping to having to dive on the floor and dig a ball. Everything is so unique and we are trying to teach the skills, each individual thing and the game of volleyball itself," said Holmes. "We are taking it slow to make sure we have the fundamentals down before we get too fancy with everything."

Players made two individual goals for the season. As a team they are working towards making it to state. 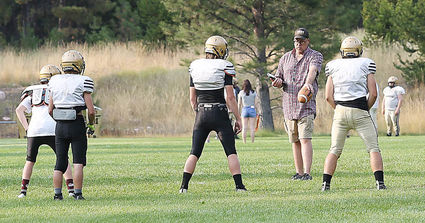 To get there, the coaches are emphasizing communication on and off the court so there are no dropped balls during the games and it is a positive environment for everyone. They also want the team to be able to serve well and be fundamentally sound. Holmes said she looks forward to playing to the strengths of the team.

"I'm looking to win games and hopefully that is what you will see on the court," said Holmes. "We will play to their strengths and get them to be in a position to where they will be most successful."

The Lady Blackhawks are looking forward to their first game at home against Charlo, Aug. 27.

"We are seven days into practice and we have improved," said Holmes. "We are beyond grateful that they were able to [have a season]. We are taking it day by day and we will finish out the season as best we can. We are looking forward to each game and the entire season overall."