Bullock: Counties given option for all mail-in ballot 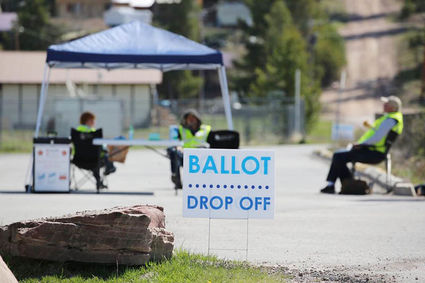 Missoula County Elections Office announced they will recommend conducting a mail ballot election for the Nov. 3 general election. The Commissioners will take action on the request at their Aug. 13 Administrative Meeting at 10 a.m. Pictured: Election judges accepting ballots in the Seeley Lake Elementary parking lot during the May 5 special district elections.

Governor Steve Bullock announced Aug. 6 that like the June primary, counties will be able to opt in to an all-mail voting system. He also directed early voting to be expanded based on recommendations from the Montana Association of Clerks, Recorders and Election Administrators.

"The local election administrators stressed there is serious ethical concern about conducting an election under standard procedures," Bullock said in a press conference Aug. 6. "The risk of viral transmission and associated illnesses are serious and imminent, and this in turn affects the right to vote."

The election workers sent a letter in late July detailing how under normal circumstances workers must be close together and share papers with the public. They said it would be best to give Montanan's the option to mail in their vote, as they did with the June 2 primary.

COVID-19 cases continue to rise across the state of Montana. By Aug. 8, over 1,500 active cases were reported statewide. During the primary, there were less than 50.

All Montana counties opted for mail-in voting during the June primary. Missoula County announced the county will opt into the mail option shortly after Bullock directed counties Aug. 6.

"With the governor's directive, we're given a clear path toward the safest, healthiest way to run an election, where we'll send every active voter a ballot in the mail," said County Election Administrator Bradley Seaman.

The decision to do mail-in ballots back in June led to the largest number of people voting in a Montana election ever, with 55% of the population casting a ballot. Seaman said voting in Missoula County was up 10% during the primary and hoped the number will grow with the new options the county emplaced. The late registration was extended to 10 days before Election Day, like in the primary.

Registration can be made online, or at pop-up satellite locations around the county in the next two months.

Ballots would be mailed to registered and active voters by Oct. 9 for the general election, and all ballots have prepaid postage. Voters will still have the option to vote in person at polls Nov. 3, where masks and social distancing will be required.

The decision also included an extension to make early in-person voting to run from  Oct. 2 - Nov. 3. Voters can vote at the election office and other satellite polls that will be announced prior to Oct. 2. There will also be mail drop-off locations for participating counties, including Missoula County.

Ballots must be dropped off while the election office is open, which is normally 8 to 5 p.m. Mondays through Fridays, but will likely extend hours during the election. For more information about the mail-in voting, email electioninfo@missoulacounty.us or call 406-258-4751.