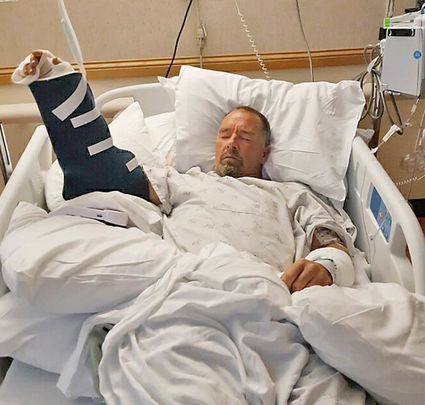 Rural Choteau resident Shanun Rammell, 50, rests in his hospital bed at Benefis Health System in Great Falls after being mauled by a grizzly about 14 miles east of Choteau on July 27.

CHOTEAU - Montana Fish, Wildlife and Parks on Monday still had five grizzly bear traps east of Choteau where a grizzly mauled rural Teton County resident Shanun Rammell on July 27, but a ground and air search has failed so far to find the bear.

Rammell, who was hospitalized at Benefis Health System in Great Falls, was bitten on both hands, his forearms, his shoulders and his back and sustained scratches, gouges and puncture wounds. He underwent surgery to repair the damage to his right hand. He is no longer in the hospital and is expected to make a full recovery.