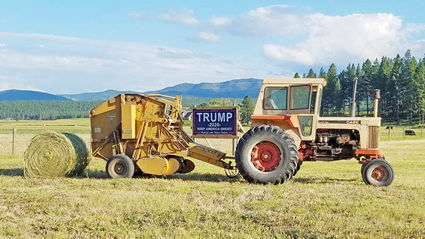 The Trump for President sign in a field visible from Highway 200 in the Potomac Valley was spray painted during the night of July 27 - July 28. The solar and battery lights that lit it up were also painted.

POTOMAC – Two political signs promoting Trump for President were defaced with spray paint last week in Potomac. Both signs are visible from Highway 200 and were on private ground. One was lit and the lighting was also vandalized.

The Missoula County Sheriff's Office reminds the public that political signs are private property. If a sign is stolen, it can be reported as theft. If a sign is defaced or vandalized, it is considered criminal mischief. If the land is posted with "No Trespassing" signs, someone could be charged with trespassing as well.

"If you have a sign that has been damage...