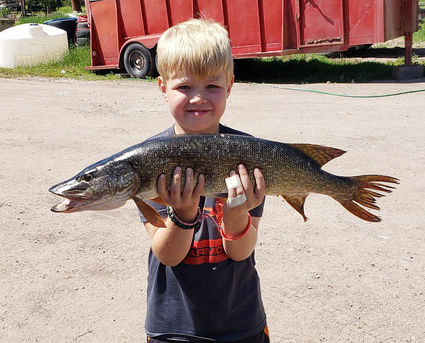 James Hocking holds up his six pound, 27 inch northern pike. "It is safe to say he is hooked," said Hocking's father Adam.

SALMON LAKE - To land a northern pike that is half as long as one is tall is definitely an accomplishment. Ten-year-old James Hocking of Butte, Montana did just that while fishing on Salmon Lake over the Fourth of July weekend.

When Hocking set the hook, the pike went straight to the bottom and nearly took him with it. His step-mother Samantha grabbed him and the rod and kept him in the boat while netting the fish. His grandparents Norm and Charmin Bernstrauch of Seeley Lake were there for the action.

The pike weighed six pounds and was 27 inches long.

Thank you for the share... He has never been so happy.