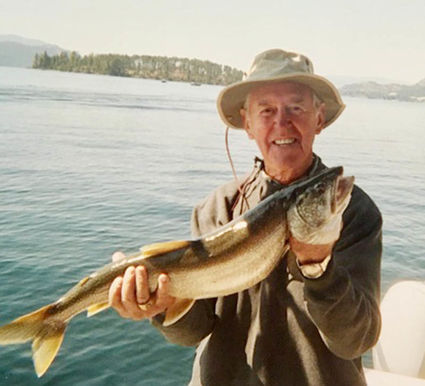 SWAN VALLEY - Turk Rowlands (C.P. Rowlands, Col., USMC (Ret)), summer resident in Condon for 25 years, passed away at his home in Riverside, Calif. May 31, 2020. He was born as Cledwyn Pearce Rowlands Oct. 7, 1931 in Wilkes-Barre, Penn., the only child of parents who emigrated from Wales. He is survived by his wife of 58 years Suzanne, his son Stewart, son David (wife Carol) and grandchildren Jenna and Matthew.

He attended and graduated from Wilkes College and was commissioned a 2nd Lt. in the Marine Corps in 1953. His Basic Training group at Perris Island, S.C., was scheduled to enter the Korean War but the truce was signed in July of 1953. His first overseas base was a training camp at the top of Mt. Fuji in Japan where they lived in tent camps. In 1955 the Marine unit sailed to Okinawa. Two other overseas experiences were another year in Okinawa, and a year in the war in Vietnam where he earned a Legion of Merit with Combat "V."

Among his many assignments during his 27 years of active duty were commanding officer of several artillery batteries, Chief of Staff of Force Troops at 29 Palms, Calif., two ROTC assignments, Miami University in Ohio and Commanding Officer of the NROTC at the University of Kansas.

After retiring from the Marines in 1980, he worked for two years as an administrator at the U. of Kansas Medical Center. Then he accepted a position in California as Executive Director with the Riverside County Medical Association and Foundation for Medical Care where he worked for 13 years and retired in 1995. He always dreamed of owning a fishing cabin and was fortunate to buy in 1991 an A-Frame on a hill looking at the Mountains.

In final retirement, his greatest joys were fly fishing in Alaska, tying flies and building rods for himself and friends, playing golf in Montana below the Swan Mountains and traveling to Hawaii to feel the ocean and see the cliffs of Kauai. Through life he supported his wife's interests, from attending dog shows with the family Rottweiler to looking at palm trees, wherever they may grow around the world.

Whether it was supporting higher education and advancement for his employees and co-workers, ensuring the friends and neighbors' wines were always in stock or buying little gifts for family and friends, Turk was always thinking of others.