Miss For and Mrs. Montana take over Tamaracks Resort 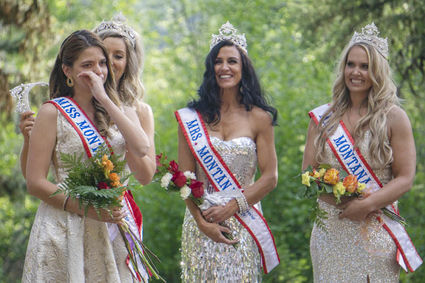 Anna Haslund holds back tears as she is crowned Miss Montana for America.

SEELEY LAKE - When program director of the Montana Mrs. America pageants Cindy Archer canceled the statewide competition due to the coronavirus, she remembered talking with Jessica Kimmel about a new outdoor venue at the Tamaracks Resort. Months later, Miss Montana for America and the Mrs. Montana 2020 competed and were crowned in Seeley Lake June 13.

"So we are so lucky and blessed to be in Montana," Archer said. "The event place was spread out in open air and the cabins provided a place to stay with open air too."

The Mrs. Montana and Miss For Montana pageants are a part of the Mrs. America pageant network. Unlike the Miss America featured on television, Archer said this pageant is more inclusive and focused on supporting non-profits with good causes around the state.

The nationwide platform, known as "Victoria's Voice," is a campaign to address the opioid epidemic in the US. The 2019 winner of Mrs. Montana, Michelle Reimnitz, used her platform to help a pregnancy center in Kalispell, which delivered, supplied and educated expecting mothers.

Four competitors took the stage to compete in the pageant, two in the Mrs, and two in the Miss. Three judges rank contestants by three sections a private interview, a one-piece swimsuit and an evening gown.

In the Miss for Montana section, Anna Nicole Haslund of Missoula took first place over Flathead's Baleigh Doyle. Haslund, who is deaf and used a translator for the competition, originally thought she finished her pageant career after Miss Montana USA, the state's teen pageant.

"Then Maurine, the director of Miss Montana USA, shed some light on this other pageant," Halsund said. "I was inspired. [It] let me try one more time, one last shot."

In the final round of the pageant at the Tamaracks, Haslund and Doyle were within one-tenth of one point for two categories, which drew them into an extra round of questioning in front of the crowd of almost 50.

Haslund said while she feared public speaking, the opportunity to talk about her platform, helping other deaf people participate in society, was worth it.

"It's really hard to struggle to recognize my position, with my voice and being able to speak out," Haslund said. "But I'm really happy to honor people and represent Montana and to really shine on my platform, especially in Las Vegas."

Amanda Drake of Gallatin County edged Amy Boekel of Billings to take the Mrs. Montana crown. According to Archer, any woman who is over 18 and married can compete in the competition.

This year, the national organization added another title for each state as well, Mrs. Montana American, given to each runner up in the state.

Boekel will not only compete against other states but is already set to face off against other countries in an international competition held in Sri Lanka.

Though the winners are preparing to go to the national and international competitions, it is still unknown if they actually can, due to the coronavirus. Archer hopes to be in Las Vegas in late October, where the competition is held yearly.

"It really depends what crowds are going to be allowed to do in a closed facility," Archer said. "Being in a theater is way different than being outside."

The event was the first at the Tamaracks for the year. Co-owner Jessica Kimmel said while the weather was unpredictable, the event came together. She hopes that the outdoor venue space will be able to host more events, like small concerts. 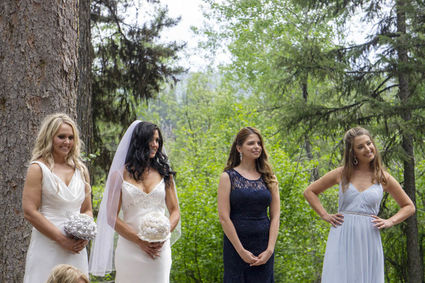 All four contestants pose on stage for the introduction segment of the pageant.