Harris and Walz finish on top at Mr. Pike 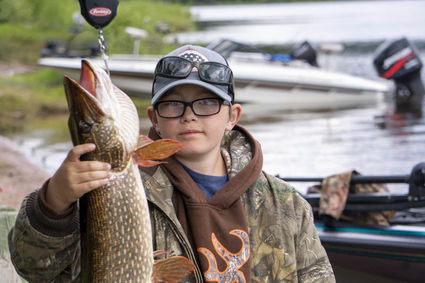 Hunter Butler poses with a recently weighed northern pike. Butler fished for at least part of the second day.

SEELEY LAKE - Fishermen and women braved the weekend weather to finish out the annual Mr. Pike tournament June 13 and 14. Though less than 10 teams fished the event, it was still a celebration.

"It is just about us friends coming out and having fun while trying to beat each other," said organizer DJ Harris. "Just another fishing trip."

Harris, who with teammate LeeRoy Walz, finished first in the tournament with a total of 37.8 pounds including the largest fish of the tournament weighing 8.6 pounds. They collected $300 total. The pair had a solid catch for both days, catching at least 15 pou...